And so begins the first of our Photo Hunts for 2018 & linking with Kate & friends once again.
Just a quick note to say thank you to all my last post's comments, but have not had much energy of late due to this persistent heat & humidity, which is very sapping.  If I don't leave replies from this post, it's because we have the last of grandie minding for a few days. Maybe I'll be able to pop by & have a quick catchup, as Little E enjoys seeing what I pick for this hunt. 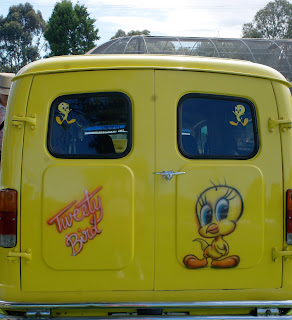 I couldn't help myself with this one.  It is the back of our friends Morris Minor Panel Van and it was taken back in November 2017 after a decision, that we'd like to go along to the Morris Minor Nationals, which were being held here in Melbourne.  When we belonged to MM clubs, we nearly always attended, but as we belong to a mixed type car club, locally these days, we don't tend to see what is going on with the Moggies.  We were able to enter ours int the Commercial class & pulled in alongside this.  We knew exactly who it belonged to, as they are very old friends from the time we first joined an MM club back in Hobart, Tasmania in 1987.  An enjoyable event & good to catch up with old friends. 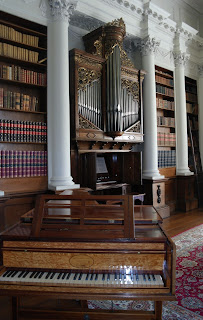 Here we have a beautiful small organ in centre back of photo.  This is a very naughty photo.  Taken at Temple Newsam in Leeds, where it transpired, I wasn't supposed to be taking photos.  There were no notices anyway & we'd payed at the entrance, where I had my large camera hanging from my neck, so it was in full view.  I didn't have to delete any, but was asked not to take anymore. 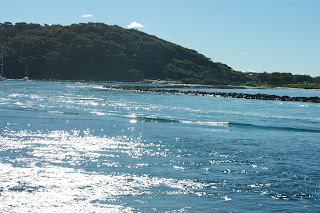 Sunlight glinting on the water at Wagonga Inlet in Narooma, which is on the south coast of N.S.W.  This was taken whilst eating lunch on our way home from the trip to Sydney last year.  I wanted to be different, I hope. 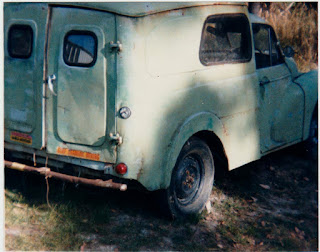 Our Morris Minor when pulled from a farmer's blackberry patch.  Maybe it could have looked like the one above, but alas, once moved to bring home, the van part actually fell off from all the rust.  Most people who follow my blog will know what she looks like now and if not, I'll remedy that on my next post.  Whoops, just realised this hunt is a bit MMish!!! 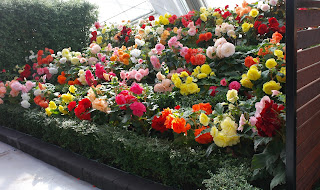 Although I've shown the begonias in the glasshouses at Ballarat Botanic Gardens before, I felt they deserved a place here, in this category, as they do have such a broad colour range. 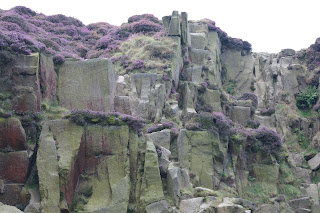 I've debated much over this, as I've so many I could use.  With the suffocating heat at the moment, I keep thinking about being cooler & remembering lovely days out touring & walking through the northern English country side.  This  particular photo was taken at the Cow & Calf on Ilkley Moor.
The colours seem cool & relaxing for me today & bring back some wonderful memories of  lying in the heather gazing up at the sky & watching some intrepid climbers braving the cliff face.

OK, that's my lot for today, but I am leaving you with one last photo. 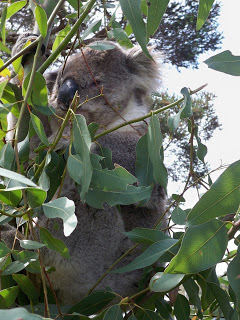 Wow, it was definitely a scorcher today & our weather station topped 42.7° and is hovering around 38° now, at nearly 8pm.  A cool change has moved through Melbourne which is much closer to the coast than we are, so hopefully it will soon be upon us.  We do have a cooling system, so inside we could keep it down around 24-27, which is just bearable for me.  I took the photo below at about
4.30pm to show what a poor wilted garden we have.  It will pick up over night. 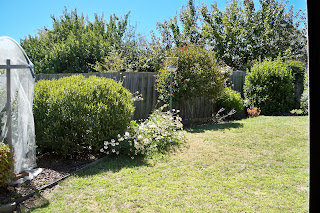 I plodded through some essential housekeeping this morning,  as well as  watering the veg beds & cleaning en-suite, before starting up the quilt machine to finish the second quilt on the yellow backing.  Off the machine and ready to find the bindings. 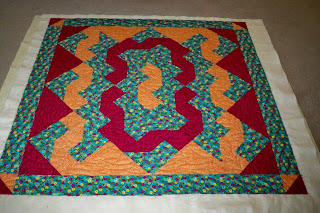 The one above is one of my own designs, that I have made for the book (ha-ha), I'd like to do one day. 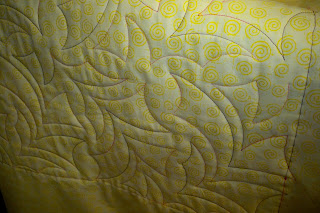 The pattern I chose is Restless by Apricot Moon. 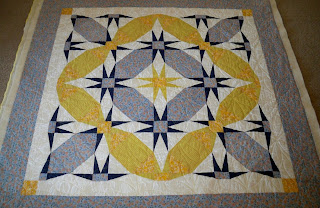 The one I showed on the machine last post, which is from a very old magazine and made in January 2000. 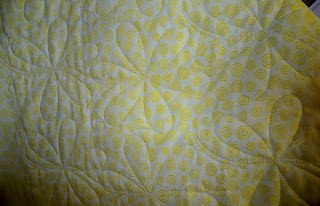 The pattern I chose for this one is Simple Daisy & I've forgotten the designer at the moment.

Now for some silly useless information about the above, but it did make me laugh.
The top quilt is one I named Whoopsa Daisy, (no idea why) and the one below is Pinwheel Daisy, as I mentioned before.  Notice the name of the pattern I used for that one and I actually used a Signature thread in colourway Daisy.  Daisies all round & the garden photo had my Shasta Daisy looking all forlorn.  None of this was intended, but realised after I started loading the photos.

On the little table next to my armchair, I have an assortment of "bits", which I use on a regular basis, but it has now been joined by this little box Hubby made me. 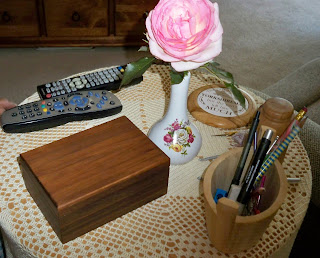 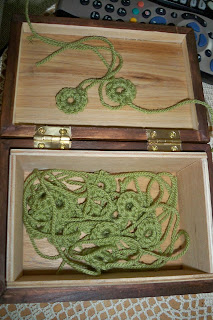 How about 14 flower centres for my Sunshine and Showers rug.  I've never attempted crochet flowers and these are quite fiddly and definitely a steep learning curve.  I need to do 14 more of each of 2 other shades of green, before I start the petals.  Wish me luck.

Just thought I'd do a quick post after such a hot day and am now off to crochet, whilst watching the rest of the cricket, so good night all.
Take care Susan.
Better not huggle tonight as still too warm 😊
Posted by Susan Smith at 8:20 pm 6 comments:

Yes I've been a bit absent of late...............
The lead up to the silly season was quite hectic, but in amongst car club events, some child minding, carpet laying & then our visitors, we didn't get to see any of our children or grandchildren over the Christmas period.  I think this makes me feel somewhat flat, but distance is our biggest problem & DD spent it in Sydney with in-laws.  Luckily our visitors took our minds off it till they went home.😞
Now I need to get some motivation back & find my mojo.  Hot weather & sore back & ribs (once again), don't help, but I'm telling myself, "just get on with it".
A blog post might help!!!!!          Where to start.............. 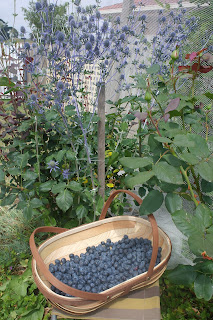 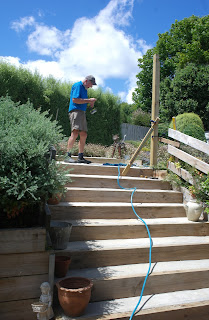 The photo on the right, was hubby a couple of hours ago, starting to erect an arbour at the top of the steps to support a wisteria we purchased, just before the hot weather set in.  Has been a little cooler for the last few days.


The two raised veg beds we built & I showed a while back are now quite full and we've tomatoes, that aren't doing well, although they look quite lush.  My fruit seems to have lots of blossom end rot.  I've picked a few feeds of beans, zucchini (courgettes), and silver beet (chard).  That rather wayward pumpkin is sporting a few small fruits for now.  The rhubarb also needs harvesting again. 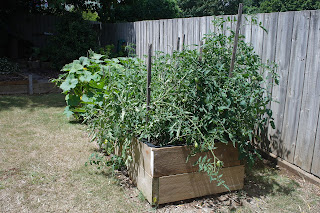 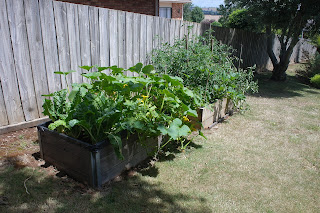 Still with the garden, some months back, we were told about some timber & fittings being given away by the owner of some shops.  An Indian Restaurant had closed it's doors & was to be leased out once more as shop space, so as long as one was willing to do the work of dismantling things, the timber was ours.  We came home with some of these (not in our plan), but we've put them to good use. 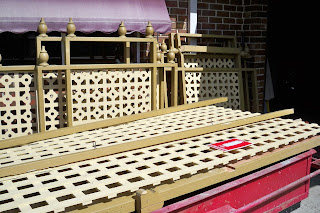 The panels, which reeked of curry.😄 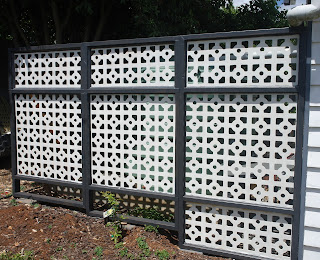 Now some of them are hiding the water tanks behind the shed.  We've planted a banksia rose to clamber over them, which will form the first part of a small garden in front of them.  We'll plant it up once the weather is more favourable.

CRAFTING.
I'd really not done any sewing for some time, either on my Bernina or the Gammill, which had not had a quilt on it since August (naughty girl).  Earlier in the week, decided I had to get some things done or else.  I had started a quilt that I designed myself to use up some of my rather embarrassing stash.  The main piece is now done and just needs borders.
Next on the list was to oil Bubs (Gammill) & starting her up.  Yellow backing pinned on and two quilts ready and waiting, so a small one (made in 2000 from a magazine), was put on late yesterday afternoon, and low & behold, it is done as I write this. 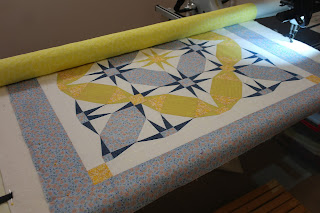 And as I worked, I was watching the One Day Cricket between England & Australia. 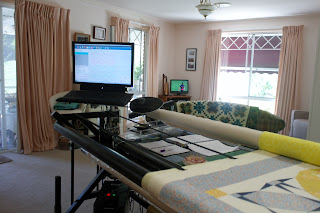 Not so much watching, but listening, as I can't really see the small TV in the corner of the familyroom. 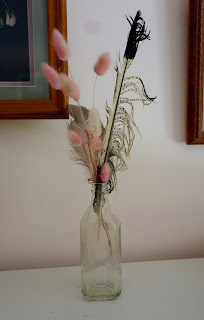 This isn't so much crafting, but something I fiddled about with.  I picked up the eagle feather a long time ago and behind that is a galah feather.  The pretty pink seed heads were found on a day out in early December, lying on the ground.  I think it looks cute for now. 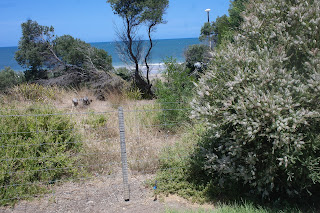 We needed to pick our visitors up from their friend's house one evening after dinner, so had a day out for ourselves too.  A quick trip to Torquay was decided upon so I could check out Amitie Textiles, where I am booked in to do a quilt class with Angie Wilson, a young Australian quilt designer, that I'm really looking forward to in February.  The above photo is looking toward the water at Torquay from a walking track 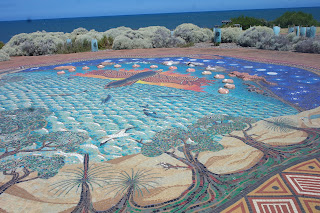 A mosaic sundial, again at Torquay, where you stand beside the month and you can tell the time of day from your shadow.  It is both beautiful and interesting. 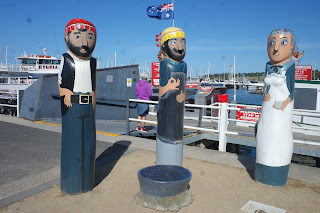 On through Geelong on our way home & I quickly snapped these painted bollard figures that adorn the bay.

Another day out in early December, saw us have a quick picnic lunch in Braeside Park, where these wonderful carved tree stumps are.  This is a suburb of greater Melbourne. 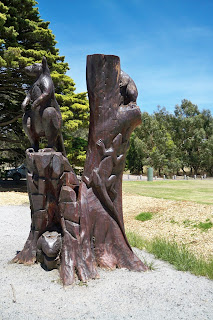 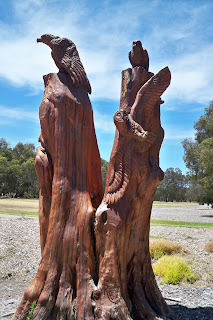 A quick round up of just a few things that have happened in December and January, that I've not blogged about.  I'm just about done for this post, as my photos seem to have a mind of their own and keep jumping about.

OK, I'VE HAD ENOUGH.
Silly Blogger!!!!
Take care all and huggles from Susan.
Posted by Susan Smith at 8:23 pm 18 comments: