This will be one quick post.  Sorry I've been so out of touch this month, but what with the purchase of a new to us car, hot humid weather, (which is very draining), the horrific flooding rains in Queensland & northern N.S.W., plus so much turmoil in the northern hemisphere, I've been finding it hard to really blog about anything in my little space.

Sandra from mmmquilts has helped me immensely with doing a linkup each month about our "drop everything & make it" crafts, so this is one thing that kept me busy over the last 2 months or so.  The quilt was made quickly to the flimsy stage, then onto the machine and that is when things went wrong.  My long-arm machine has a couple of niggly problems which I will get sorted soon. 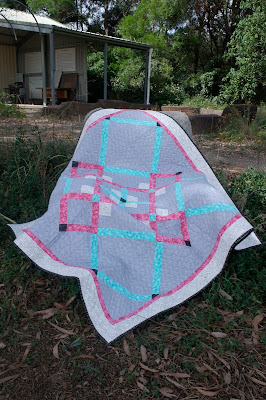 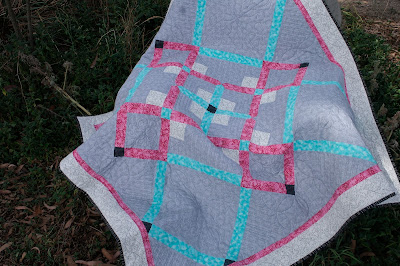 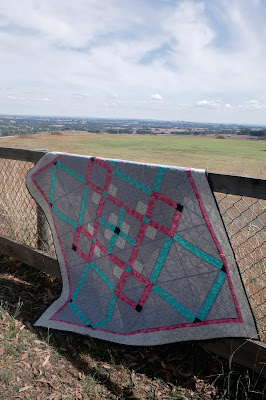 This is one of my own designs which I named "CELTIC GARDEN OF HOPE", because it reminds of celtic interlocking designs and my word for last year was Hope.
I finally got it off the machine, although there are few little mistakes in the quilting, put the binding on and finally got to take some photos yesterday up at Jindivik in the very neglected Community Garden.
We were very surprised to see it looking so bad and the adjacent cricket ground is having a bit of a makeover & drainage work being done too.
I took a quick photo from over the road looking north towards the ranges, just to show how dry it has become down in Victoria with only 5 mls of rain so far this month.  Big difference to what they are experiencing up North. 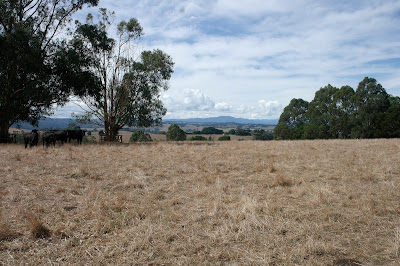 Our car club is now trying to get back into some social outings after the last 2 years of having to cancel so much and the Saturday before last, a run to Noojee Trestle Bridge had been planned to have a picnic.  Arriving down at the clubrooms we thought we were going to have quite a turnout, but alas, only five of us went with 3 cars and ours was the only old one.  A bit disappointing, but an enjoyable day eventuated, even though the bridge was closed due to repairs, so we made our way to the static train attraction which used to grace one of our local town parks, but then was taken by enthusiasts to its current home.  This happened as our council thought it took too much money & time for its upkeep & were going to get rid of it for scrap.  So glad it got a reprieve & is well looked after by a dedicated group of volunteers. 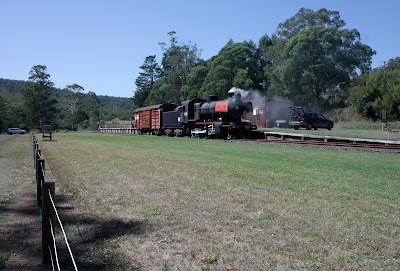 On arrival, we noticed it had steam and found that they fired it up periodically to make sure it stays dry inside and doesn't just rust away.  They clean up around the site, gathering fallen branches & leaf debris to use in it.  Killing 2 birds with stone, as one would say. 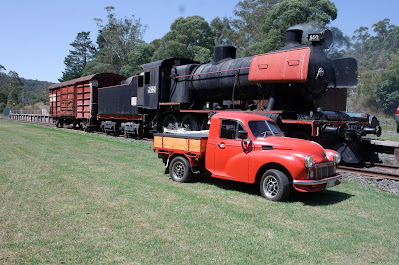 And here is our Morris Minor alongside, an offer made by the volunteers to us and then finding out that they were good friends with one of our late members who was instrumental in getting the train up to Noojee.
OK, strange combination of things, but not much has happened this month, but hopefully I'll be in better spirits, come March and we may be getting out a little more, if fuel prices don't get too inflated.  Even if that happens, I will try and tote my camera around & get back to my normal old self & see the little things in life as I used to.
Thanks to all those that read this far, take care and big hugs from down under.
Susan.😊
Posted by Susan Smith at 1:36 pm 17 comments: