The last of winter is nearly here and the weather has definitely been better the last few days.   We've taken advantage of that.   Last Wednesday I hankered after a walk along the beach and smelling the sea air, so took a quick trip south of home through the hills to the coast.  It was cool and windy and I forgot to take the camera on the walk, but managed to take a few photos near to the car park.  Having a wet, cold and windy winter has the beaches looking quite forlorn and filled with debris from high tides and wayward waves.
A big thank you too, for all my lovely comments on last posting.  I've tried hard not to use the computer as much lately, so I can catch up on lots, but do pop in and read my emails and bloglist, but alas just didn't get around to replying on my own.


On the way home we saw these.

We decided to head to Mirboo North, as we knew there was a little bric a brac shop, which  also sells old building materials, hoping to find some timber sleepers and pavers. (maybe!) On the way we stopped at a small lookout point to eat our sandwiches and this was our view. Lovely and green at the moment.

When we arrived in town, the shop was closed, so armed with my camera we walked around town, looking at the lovely murals.  They are somewhat faded these days, but still special. 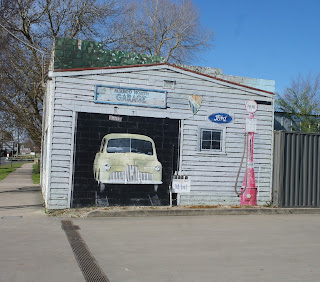 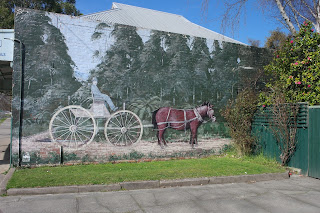 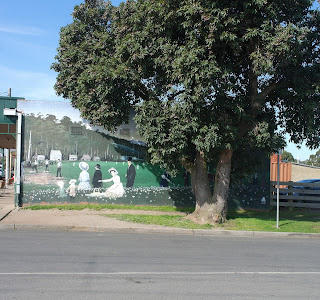 On the way home, we followed a narrow gravel road, which is frequented by log trucks on weekdays when they are working in the forests.  Glad it was the weekend.  We stopped where the road widened and I took these photos.  Sorry it's a bit heavy on scenery today!

SHOULD I TELL AND SHOW!!
I pulled this tub from underneath my quilting machine, as I've done very little on her lately and am ashamed that I do have a stack of my own to finish at some time.  Some were made to learn a new technique, showcase a wow fabric or made "just because".  I'll keep some as gifts, some for charity and special ones to stay until I feel they can be let go.


I've also been playing with fabric and this is on the design wall at the moment and crocheting whilst watching TV of a night, along with a spot of reading.  The latest book was 'Walking Home' by Simon Armitage.  It is about a journey along the Penine Way from north to south, instead of the way most people go, which is south to north.  I found it very informative and entertaining too.  The best part was that this walk travels through two villages where my ancestors came from.

A pretty full week with our outings interspersed with the usual mundane housework, making meals, a little gardening, catching up with friends and trying to design a quilt for seven embroideries which I showed way back in May 2013 and must get done.  Hope all have good week ahead and take care.
Susan.

Just a quick post.
Why is it that we seem so busy, but when you look back on the past week, you begin to wonder what you've actually achieved?  I suppose we are still busy sorting, tidying and getting ourselves organised with both house and garden.  It is all coming together slowly.
Last Wednesday these appeared on our roof.

These won't be up and running properly till they are certified.  The red tape you have to go through these days is mind boggling at times.

Yesterday we visited DD and family and I helped with some craft.  She and the children had been making bookmarks to sell on a stall at the church to raise money for much needed new chairs.  I punched a lot of holes and threaded them with pretty ribbons.  Hope they do well.  I also got one rose pruned for her and also picked a bunch of Earlicheer jonquils to bring home.  I forgot to take camera, so no photos of their efforts, but here's one of the flowers.

Today I did a quick bit of baking and made a Lemon Drizzle loaf and a chocolate slice.  Talking of baking!!  Last week I decided to make some biscuits and prepped my tray, made the mixture, rolled teaspoons of mixture and placed them neatly in rows.  I then went to the oven and OMG, the tray wouldn't fit.  I'd not realised how small this oven is.  I had to take them from the tray and place them onto the smaller slice trays and cook them with only one pan in at a time.  Now that took a lot longer than it should have, so I'll have to do some thinking about that situation. 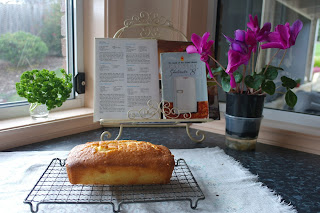 Notice in the pic above that the cyclamen is still flowering, though I've had to deadhead it a few times.
One last photo to end this post.  I do love the moors when covered in pink/purple heather and I have two lovely plants in my garden which are flowering at the moment.
I'll finish this post now, because sitting here typing is just a tad painful today.  Earlier I asked hubby to help me move something and I got on one end and I think I twisted awkwardly and now have a very sore back.


Hope everyone is having a great weekend and take care.
Susan.

This is the quilt I've been trying to get to the pieced top stage and now all I need to do is add a border, although the original didn't have one.  The pattern was in a magazine called Quilts with Style (now discontinued) and ran over 6 issues in 2006.  Janette and I started ours, we think, sometime in 2008, so definitely what you would call a long term project.  Once I've worked out a border, I'll tell a bit about why it took me so long.

The Garden, which will always be a work in progress.

We also planted a magnolia, but the photo has disappeared, so I'll have to take another one and post again sometime.  More garden photos will hopefully be popping up often as the weather improves.  It was lovely spending time in the garden yesterday and finding a couple more spuds when I was digging over the above bed.

TWO MORE WIP's.
No. 1.
I'm still working on my giant granny rug, though not as much done as I would have liked, but am also handsewing a binding to a quilt.  Have to work on these alternately as the chillblains are still hanging around.

On my first ever blog post in January 2013, I showed our beloved Morris Minor.  Over the years she has been on the road, she's taken us to many places in Australia as part of the Morris Minor Touring Club, towing for a while our small camper trailer, on local club outings, then as hubby's transport to work for the last ten years before he retired.  Now she really does need some extra TLC.  We acquired her in 1991 when we saw her in a blackberry patch.  The local farmer said if we could get her out, she was ours.  Hubby and the two boys managed to wangle her out and she's been with us ever since.  Originally a panel van, but as the back was just completely rusted away, she became a ute (pickup), was registered in 1992 and went on her first trip that year to the Flinders Ranges in South Australia.  Hubby did all the work himself, but she doesn't have her original engine, has had the cab extended a little as he's quite tall (6'3") lovely timber boards on the back and runs on both gas and petrol.  OK, for those who are new to following, I'll pop on the better photo too.

OK, enough for now, so I can post this and get to a few other things as the sun is shining after a few brief showers this morning.
Hope all had a great weekend and take care.
Susan.
Posted by Susan Smith at 1:53 pm 16 comments:

This was supposed to be a post about the 1st August.  The day got away from me and I was tired last night, so just watched mindless TV and crocheted.

First, I would like THANK all who commented on my previous post, but time wasn't on my side and I didn't reply.  Sorry.
We'll now pretend.  HAPPY YORKSHIRE DAY to all my family and friends in that gorgeous county.  Happy Birthday also, to horses here in the Southern Hemisphere and there was to be another, until I realised that in 1992 the "powers that be", changed Wattle Day from the 1st August to the 1st September, even though there are clouds of yellow brightening roadsides and bushland now. 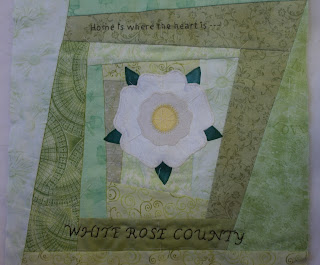 The above is an applique which I've shown before, but it was in the WIP box which I've been sorting through and I'm now thinking about how to use it.  I thought it appropriate for this post.
And, the photos I chose from our trips in 2009, 2011 and 2014, which are some of my favourite places, I wasn't going to label them, but I'll be good and then everyone knows what they are.

The above photos are in no particular order and only part of what I could have chosen.  Although late, I do hope the weather was kind and being a Saturday, that most of you could get out and about to enjoy your wonderful countryside.
During the week I hope to post again (trying to keep to a bit more news), but this afternoon we are off visiting and also getting some "horse poo" for my veg bed.  Hmmm!!  Best go and turn out the chocolate cake we are taking with us, before it gets too cold.
Have a great weekend all and take care.
Susan.