WHAT AM I MAKING?

Two things that are in progress at the moment.  I am wondering if anyone can guess what they are?
Some may recognise the bird fabric from an earlier post.
We are off to Lakes Entrance this weekend with the caravan for three nights as hubby has 4 days off, which only happens once every 15 weeks on his shift roster.  We try to take advantage of these to have a relaxing break.  Hope to have some lovely photos when we get back.


Also have some new knitting on the go which I will take with me in the car and a couple of new magazines to pick up from the newsagent.  I may take the book I am reading at the moment, which is an Erica James novel called The Hidden Cottage.

This is all for now, Susan.

Email ThisBlogThis!Share to TwitterShare to FacebookShare to Pinterest
Labels: sewing 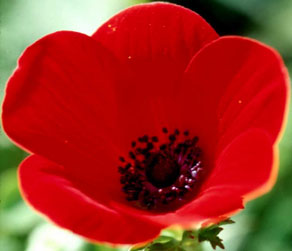 Today is Anzac Day in Australia.  It commemorates the landing of the troops at Gallipoli and is a holiday here in Oz and N.Z.

It maybe a holiday for some, but hubby is working a long shift and won't be home till after 10pm.  Buses don't take days off.

I've manged to squeeze a lot in.  Housework, then plenty of sewing.

Another week gone and not sure where it went.  Two quilts off the machine, one as a present and the other for a customer.  I've done lots but it's all gone in a blur.  Gardening, baking, eye appointment and visiting our daughter and family.  On Friday I did our weekly grocery shop and actually bought 2 bunches of flowers from the supermarket,  something I've never done before.  One was 4 large gerberas for 96c and the other a bunch of chrysanthemums for $1.80.  Now that is a bargain as they are usually about $7 and up.

Some photos below of a few of these things.

WHAT DO I THINK?

People who really know me well, will be surprised by this outburst, but to me "gifts" a very special things we give to our family and friends.

THE STORY SO FAR.

I send a lot of presents to my Hubby's rather large family in the UK.  We also have our best friends there too. .
Friend Beryl rang on Thursday night to say she'd posted a parcel to the UK (she's from Yks) and had come across a few problems with our Post Office and insurance etc., but was gobsmacked to be told that the UK party would have to be pay "DUTY" to actually receive the parcel.  She had put "gift" and the value and what was in it, on the 'custom's advice' slip.
Now we were wondering if this was true or not.
I got another phone call last night and  "YES".  The parcel had arrived and before she could take it home she had to pay 23 pound (I can't find the pound symbol).  My heavens above, you don't want to know that I
used the "S" word.  I don't really swear, it just pops out.
Well, now I am in a quandary!!!!  I make a lot of gifts to send across, but I certainly don't want the recipients paying.  It would hardly be a "GIFT".

We think this must be something to do with internet shopping, but gifts are gifts.

I've just had my photo done for my passport renewal and it looks like a mug shot and my face really looks like I have some blotchy red disease.  Does anyone think the same if they have a passport?
I may put on some makeup (which I don't wear) and have it done again.  I'm not really vain, but it's an absolute shocker.  Hubby's isn't half as bad.

A LITTLE SOMETHING ON THE BRIGHT SIDE.

This is the cover of the book I have spoken of  in my last post.  It has been reprinted many times, with different covers, but this one is one of the brighter ones.  I have a Special Edition, which includes all her stories and another book on her life. 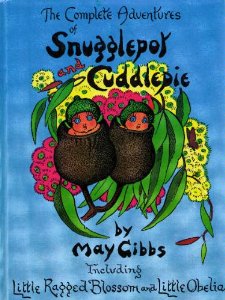 I will post again later this weekend with a bubblier lot of new.  Have a lovely weekend ladies.

TISSUES, VIOLETS AND WHAT A WEEK SO FAR.

Why is it, if you accidently put a tissue in the washing machine, it looks more like you have dumped in the whole box.  Don't do it often, but oh, when you do, what a pain.

Even though the garden looks so forlorn, I found these violets and popped them into the old perfume bottle, that is waiting for them each autumn.  The azaleas that survived are flowering as well and my 3 maples are starting to turn to gold, copper and tan. 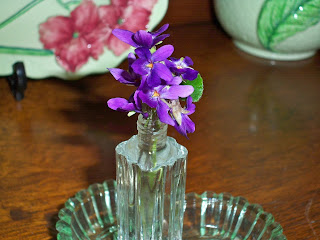 This is the start of my moaning.  The quilt below has been waiting for a week now to be started.  I decided on the pattern and tried to order it, but because I have this new computer, I had lots of troubles.  Got that sorted, bought them and then couldn't unzip them.  Hurrah!!  At last yesterday it all fell into place, so that will be started this afternoon . 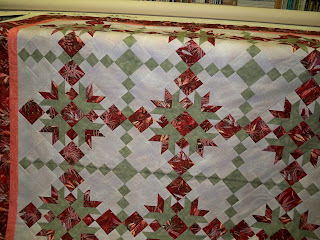 AN EASTER GIFT AND THE SCARF IN PROGRESS.

This little box of chocolates with the crocheted cosies is from one of my best friends who lives in West Yorkshire.  It was a lovely surprise and her crocheting is superb.
The scarf is coming along slowly. 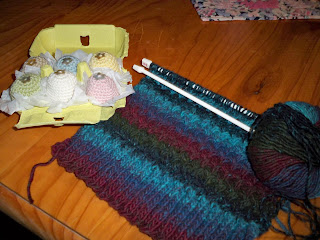 Not been very productive over the last week or so due to some family upsets, but I decided I'd been going to change the wallhanging in the hall about every 6-8 weeks, so here is the current one.  I made this many years ago, from a pattern by Anje Townrow  from British Patchwork and Quilting. 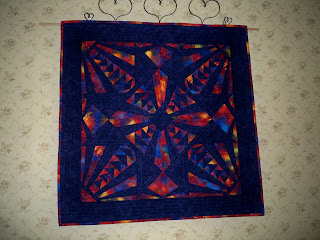 Following is a picture of one of my azaleas and another of a banksia photographed near the beach on the Mornington Peninsular on Port Philip Bay.  These banksias feature prominently in a book by May Gibbs called "Snugglepot and Cuddlepie".  It is a lovely and very Australian children's book. 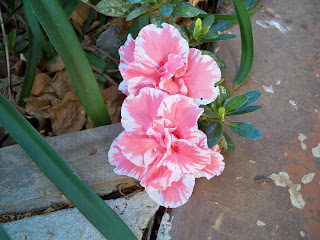 All for now and may have something to show
early next week.  Have a lovely weekend. 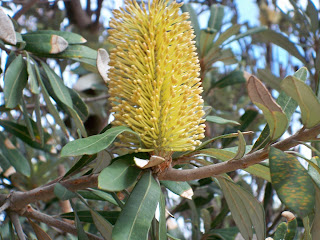 A few photos taken on our trip to see our youngest son, his partner and our two grandchildren.  We had a lovely time as we had not seen them since this time last year.  Long distances here in Oz make times together infrequent. Both of them work, he in ACT government and she for the Federal government, so their time is limited and as hubby still works too, it is hard to get together very often.  We had a lovely day out on Sunday at the relatively new National Arboretum.  The views were stunning.