Linking up with Kate for another photo challenge.  Quite a few this month were a bit out of my comfort zone, but they are all here in some form or another. 😊 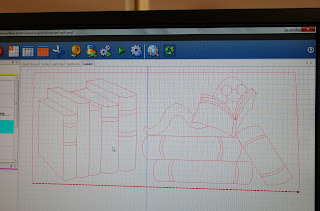 Some new patterns I'm playing with on my big machine (Bubs), that I have cobbled together & am quilting on a pieced top I made many years ago.  Just one of the many I still have to quilt, but I'm having a little fun on this and even though it is 'custom' quilting, most people wouldn't agree, as it's not all fancy feathers, swirls etc.  It's just quirky old me. 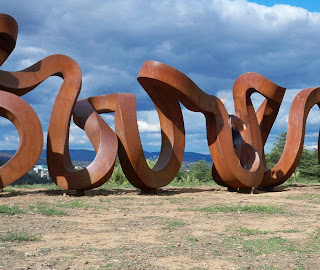 This is part of a sculpture at the Canberra Arboretum taken a few years ago when visiting youngest son & family.  Just the thing for rust. 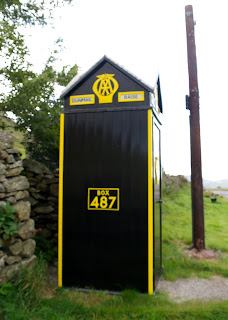 Taken on the way back from the Lakes District in 2014.  I was looking for something in the archives & stumbled across this & thought, "oh box!"  I'd been stuck with trying to find something different for this one for a while. 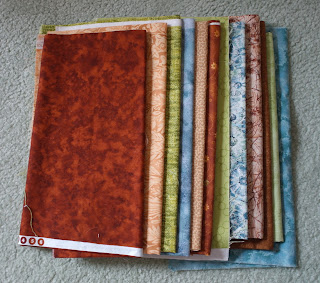 5.   BEGINS WITH.......D
6.  MECHANICAL
The above two photos were taken at McCraes Homestead last weekend, which I posted about earlier this week.  I saved these 2 for the Hunt. 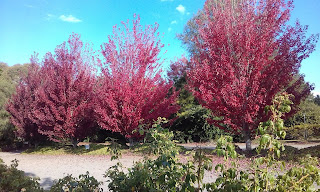 The start of autumn here in Australia.  Hubby took this photo on his phone for me.  The colour of the trees is so pretty & in Spring they will be covered in blossom. 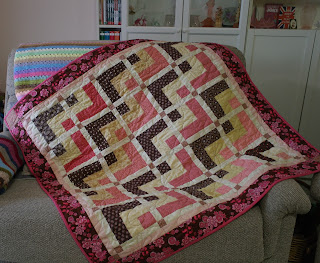 I think I showed a few bundles of fat quarters I discovered I'd bought many years ago when I started thinking about "stash busting".  This is what became of that lot.  It is called "Sugar & Spice" and was something I designed on my Quilt Wizard program & is just so easy.

9.   BEGINS WITH.......R
Taken last week at the Werribee Open Range Zoo.  Whilst loading the photos onto the compputer, I suddenly thought, "ooh", I have something for R.

10.  MY OWN CHOICE
Taken from the tower at Sissinghurst, giving a wonderful view of part of the gardens & house.  Taken again, in 2014.

My lot for this month, some of which I found hard, but then they seem to fall into place as the month goes on.  I do take my camera and list most places & also browse my archives.
Hope you enjoy and may the month ahead be a fun one for all.  Thanks again Kate for our words.
Take care, Susan.
Posted by Susan Smith at 10:13 am 24 comments:

Where has April gone?
I 'd not realised that it has been 2 weeks since I posted.
This month has been ever so busy, what with all the holidays, ie.  Easter & for us here in Oz, also Anzac day, which is actually today.  I've had all sorts of appointments with doctor, physio, podiatrist, dietitian and X-rays, which are just all sorts of fiddly bits that happen from time to time, but not necessarily on a regular basis.  We've also had a little bit of grandie minding, which makes a change for us, car club meetings & an outing, ferrying a friend to hospital for a cataract removal, then home again, and a couple of other days out. I'm also dealing with the new Disability Scheme interviews, etc., they are bringing in over here, for my brother.  So much to take in.   All in all, I don't feel that I've been home much either. .  Need to catch up with photos for the Scavenger Hunt, plus general type bits of house/garden stuff & my sewing, which is terribly behind on what I set out to achieve recently.
After that bit of twaddle, let's see some photos to go with above blurb. 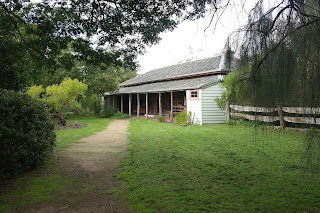 We'll start with a second day out to McCraes Homestead on the Mornington Peninsular which belongs to the National Trust.  This time I took photos.  Above is the house, which was built in 1844.
Now for a few pics I took inside & in the  garden. 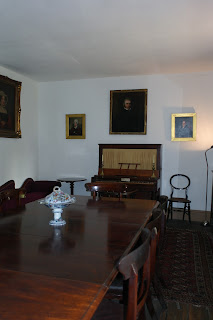 The main room above, where they ate, relaxed & entertained.  There is a central hall with 4 rooms leading off, this being one of them, with 2 bedrooms, plus another smaller bedroom, which has a storeroom behind.  The kitchen was in a separate building a short distance from the house, in case of fire. 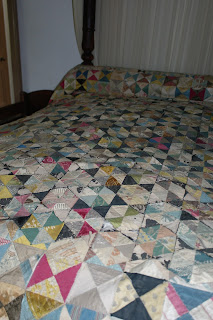 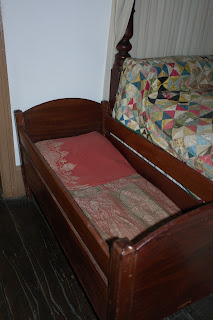 In the main bedroom, the bed is sporting a very old quilt, with the papers still in tact.  There is also a lovely timber cradle and another single bed. 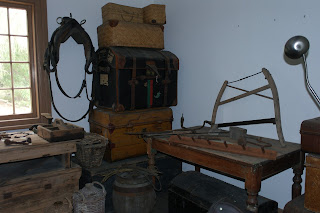 This is the storeroom, where they kept valuable items, so they weren't stolen by bushrangers or strangers.  This was in the very early days of settlement, with not a lot widely available, so everything was important. 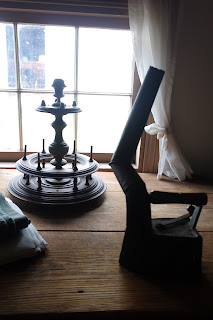 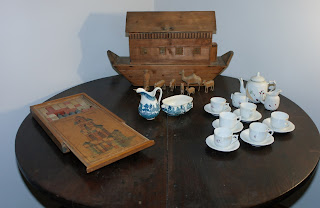 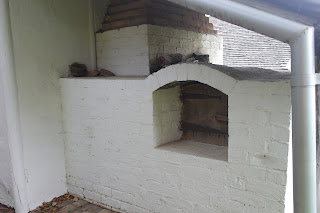 The outdoor bread oven, behind the house. 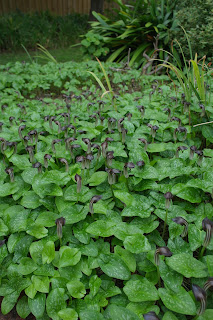 And what else did I find outside, but a beautiful bed of Arisaema.  I didn't even know you could grow these in Australia. I saw them in the glasshoue at Harlow Carr once & thought they were so pretty. They are a native of northern USA, I've discovered & I came home with a small bulblet, which I've planted in a pot.  We'll see what happens and 'yes', I had permission to take one.

Another day out was with Master L & Missy Moo over Easter when we looked after them for a day.
We went to Werribee Open Range Zoo & took a ride on the Safari Train, then wandered at our own pace for the rest of the afternoon.
Before we did go out, DD had baked some fancy biscuits for Missy & I to decorate.

I had so much to tell & have had a hard time trying to fit it all in.  I know I had a photo of the quilt on the big machine, but for the life of me can't find where I saved it.😒 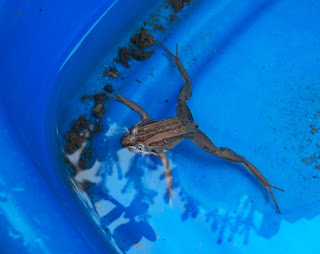 Now we knew we had frogs in our pond, but can never see them.  But, to hubby's surprise yesterday morning, he found one in a bowl that we keep to soak pots in occasionally.  Poor little mite couldn't get out because of the straight plastic sides, so we took him up & put him back in the pond.

Enough from me, as I will be back on Friday with the Scavenger Photo Hunt & hopefully be a little more organised.  Too much has happened this month & I'm exhausted.
Take care all and huggles from Susan.
Posted by Susan Smith at 4:22 pm 12 comments:

A WINNER & A REVEAL.

First, I would like to thank all who commented on my last post, as we have been busy of late with at least another 2 weeks being fairly full on, with all many of happenings.  I'll possibly update with some.

Next is winner of my little giveaway.

A bowl of paper squares (not many). 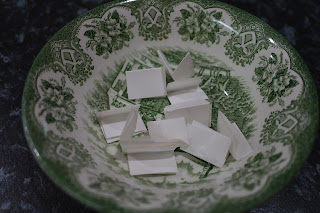 Now for that reveal of what I did with the blocks I've been working and showing, a couple at a time.

Below is my new portable design wall, which I can fold in half & store away neatly in another room, so I can get to the fabric & speciality rulers in the cupboard behind.  Much better than my old one. Those blocks have been put to bed once again, as I still can't get them the right size.  Need something less complicated at the moment to work on.  There are plenty on the computer (Quilt Wizard), in my graph book & my head to keep me going anyway.  I'll be working on another stash busting design plus some leftover pieces from a quilt made some time ago, to be another charity quilt.  That will be a post soon. 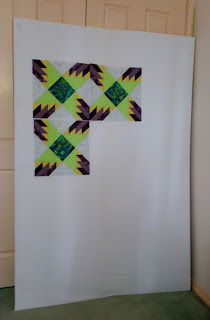 Last photo for tonight is what it looked like here in West Gippsland for most of last week till we got some lovely wind from the south-west.


Enough from me now.  I'm off to watch Charlie Luxton in Homes by the Sea, which I love.
Have a good week all & I'll be back either through the week or at the weekend with some catchups.
Take care, Susan.

A quick mid-week catch-up,  with not much at all really.

I've made the rest of the blocks for the last quilt in the grand-daughter series & here they are.

I'd like to think I can get most of this sewn up over the weekend for a show and tell on Monday.  It won't be quilted, but at least you'll be able to see them all fit together.

As I spoke about our wedding anniversary last post, I've a few photos to show of how we spent the day, but silly old me, forgot to take some of the best photos of a wonderful old house, that we plan to visit again soon.  The history was fascinating.  We made good use of our National Trust cards on the day. 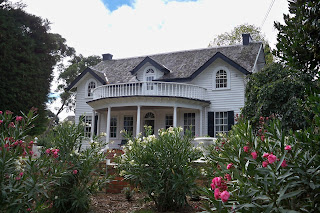 First we went to Mulberry Hill and had a quick self guided tour, but as they had a bus load in and another lot already viewing, it was fleeting.  They still have quite a bit of work to do on parts of the property, so "may" go again one day.
We then headed further down the Mornington Peninsular and went to McCrae Homestead, where I forgot to take photos.  This has a fascinating past & I'd like to share more about it once we've been again.

Off to the tip of the peninsular to see the lighthouse.

Last, but not least, a view of Port Phillip Bay from a view point on the road from Arthur
s Seat where there is a chair lift up to an even better view, I believe.  I've never been on it. We ate fish & chips for tea as a treat, which we don't have very often.  For once, I quite enjoyed, as the fish wasn't heavily battered & the chips well cooked, but still soft inside.  I am very fussy.............

OK, that was just a titbit, as these photos, keep rearranging themselves, and I might just lose my cool.

Hope to be back Monday with a winner for the "giveaway"