Not feeling 100% today, so sitting here doing an overdue post I'd partly prepared after speaking with two of my quilting friends.

1.  This was a conversation about the colour "orange", which I'd said I don't use as I'm not  a big fan.  Looking at my poor cupboard full of quilts, I noticed something, ooh, was that apricot or orange?  Then I remembered another one, so here are two quilts which pertain to that colour.  They were both made many years ago, probably late 90's to early 2000. 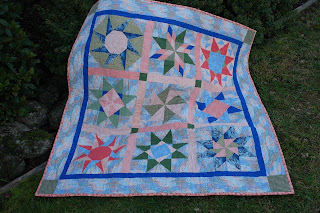 This one is just a sampler made of blocks I was trying out.  I'd bought the border fabric for DD, who said she rather fancied apricot/blue decor, but was shocked by my choice.  There it sat till I decided to just play with bits from my stash. 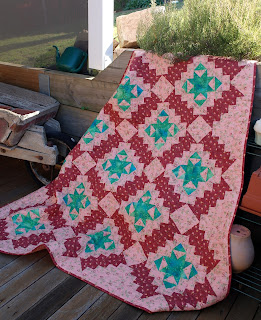 Now this one was made from an American Patchwork & Quilting Magazine, August 1998 & called Mississippi Flyaway.
Not sure how orange they look is these photos.

2.  Onto another friend who was talking about the Square in a Square ruler & saying she must use it.
I have used it to make both these quilts below. DD, having decided she wanted a mainly blue quilt done in the Storm at Sea pattern as their wedding quilt, I made a start with a small test pattern with said ruler from the book I bought when I purchased it.  What happens when you don't read the instructions properly?  You end up with a miniature, then have to figure out the sizes for something that will fit a double bed.  I did think that I would have to make an awful lot of these wee little blocks, then read the size of the pattern. 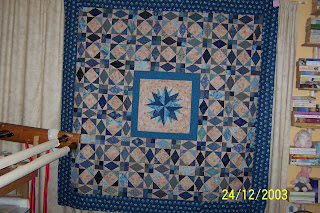 After numerous mathematical calculations, sewing & laying it on the floor, I thought, it looks flat.
Next came the Mariner's Compass to go in the cenrtre, then I was happy.  It has resided on the wall in DD's entry now for many a year.

Same No. 2 person was also talking about the 'stack'n'wack' method of working & I said I'd show her one I did back in 2005, but as we live a long way apart, here it is on my blog instead. 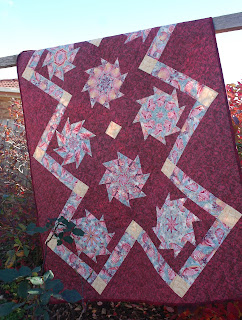 Done in a workshop one day at a quilt group I once belonged to.  I'd chosen fabric, went off with all my supplies & went to cut the fabric & it wasn't going to work, so flew home, grabbed another lot & this is what I ended up with.  The fabric actually had lots of shells & some of my sashing used the background fabric, which made mine slightly different to most of the others.

I showed the making of this a while back, and now it is finished & ready to be handed over to a charity. 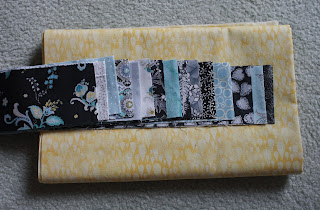 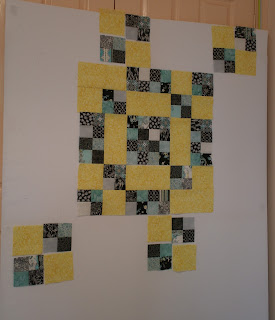 Well, this is what is happening on the design wall, although it is a bit further along now.  A photo will come on a better day, as it is cold, windy & wet, so not conducive for photo taking. 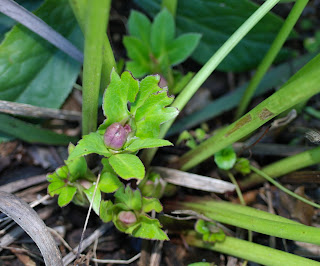 One of my hellebores is showing buds & a walk around yesterday, tells me there a couple more coming along too. 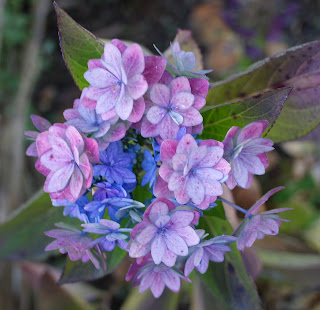 Not sure how the hydrangea looks today after the heavy rain, but it was still hanging in there last week.

Not really much to report today, but I must schedule a post about the National Trust "Portable Iron Houses" in Melbourne which we visited a few weekends ago.  Just need to sort the photos.
We've a lot coming up for June with my brother's interview for NDIS,  being scheduled for later that month, and it will take a chunk of our time.  We need to be there, which means a trip to Sydney.
OK, have a good week all & take care.
Posted by Susan Smith at 2:58 pm 11 comments:

Linking up once again with the lovely Kate to search for suitable photos to go with a list of words she has chosen.  This month I procrastinated somewhat, as although we are to post only TEN, the list consisted of 23 words.  Hmmm!!!!  Which to choose?  Well, here goes....... 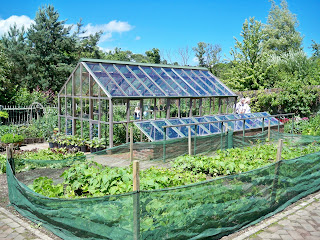 The glasshouse at RHS Rosemoor in Devon, which we saw whilst visiting UK in 2014. 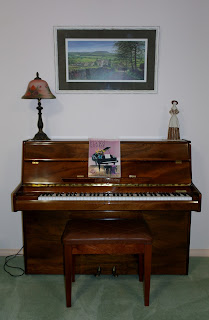 This is my cottage piano, which I saved for & bought whilst we were living in Tasmania (1987-94).  It hasn't had much use of late 😢  My hands are woeful, already this year, with very painful chillblains.  But, it will always be there for me to tinkle on when I can. 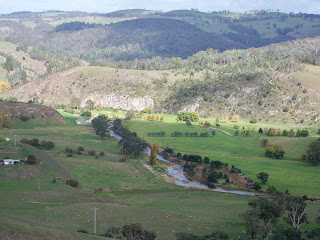 This is the Buchan valley in Eastern Victoria, which we pass through on our way to Canberra quite often.  It has some lovely viewing points & a wonderful network of limestone caves worth a visit. They are open to the public with guided tours. 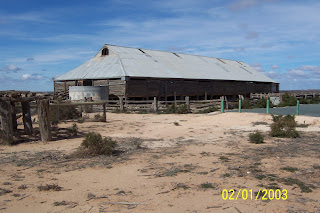 The huge shearing shed in Mungo National Park, in outback New South Wales, south of Broken Hill.
It is lovely inside too, with exposed frame & many shearing stations. 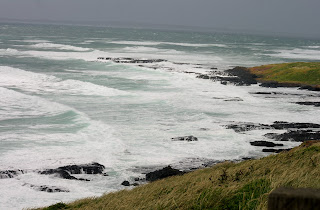 Just a quick video clip I found in my archives, that I took last year on Phillip Island, which I do believe I've blogged about many times in the past.
OK, video clip didn't work, so here is a photo taken instead.  Same location & day.  Sorry all. 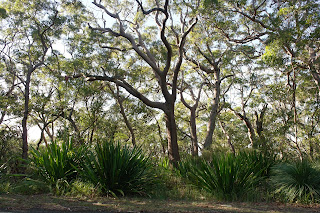 This is what we Australians refer to as "BUSH".  We go for bushwalks, "go bush", when we are getting away for the weekend and generally refer to our native vegetation as "bush".  These are gums & gymea lillies & photo was taken in The Royal National Park, south of Sydney.  I also lived in a suburb of Sydney as a child for  a while, called Gymea. (useless bit of information😃). 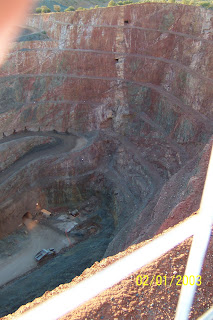 A very large deep mine in Cobar, NSW (again).  I can't for the life of me remember what they are actually mining here, That was a loooooooong way down. 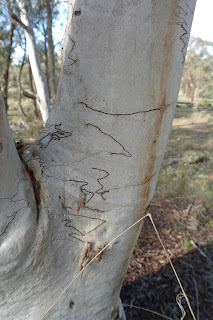 These are the "scribbles" on one of our native gum trees, which we refer to as a Scribbly Gum. (duh).
This particular photo was taken in Canberra a few years back.  I didn't realise how many photos I take of bark, till I was looking through my archives. 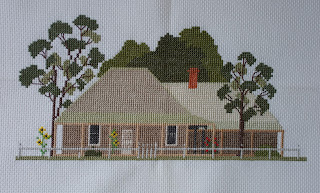 Something I cross-stitched many years ago, which is still waiting to be framed.  I'd thought about this when looking for some embroidery thread & thought, oooh, that would fit for '"stitch" on my word list, so out came the camera. 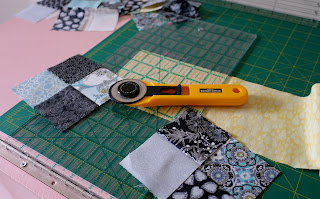 Now this is sharp, though I've only nicked myself personally, but have heard of some quite fearful injuries relating to "ROTARY CUTTERS".  I took the photo this morning to show that although I've been quiet on the blog front, I am still doing things, along with all the mundane stuff, car club bits, days out & today once I finish this, I'll make a cake and slice & also try and get quilt on the machine finished.  I'm a bit slow with everything of late due to such sore hands(I mentioned above).

I've at least 2 posts, I must get done before the end of the month, due to being busy in June with a couple of things on the agenda.

Hopefully, I've fulfilled the brief & anybody who cares to visit will find it interesting.
Thanks again Kate and look forward to what you have in store for us in June.
Huggles all and take care.

Once again I'm posting way after I'd been going to, so this is some of what has happened since my last post.

Last Sunday, we headed out to find a circuitous route to take to a coffee shop for the Coffee & Cake Run with our car club.  Hmm!  Not a success, but we did see this....... 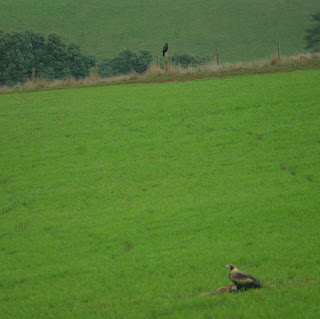 Two wedge tailed eagles in a paddock.  Not the best photo, but we have one in the foreground and another on a fence post in the distance.  Anyone who knows me, realises I have a fascination with birds of prey. 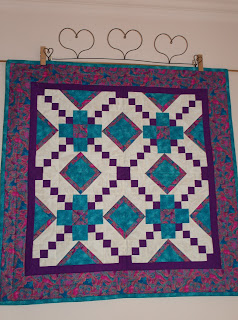 The wall hanging in the hall has changed for this month.  Made a long time ago from a Quiltmaker magazine & called Square Dance.  It's nice & bright for drearier days of Autumn. 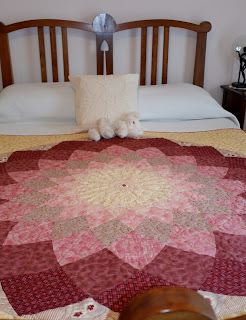 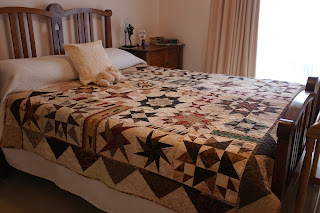 We've changed the quilt on the bed from the dahlia to some brown stars.  I'm trying to ring the changes every few months, so that I actually use the ones I still have (many) & enjoy them.

I quite often talk about quilts I've designed using my Quilt Wizard program, which is software I've loaded onto my laptop many years ago.  Below is the packet it came in with CD enclosed.  Just a tit-bit for those wondering what I talk about sometimes. 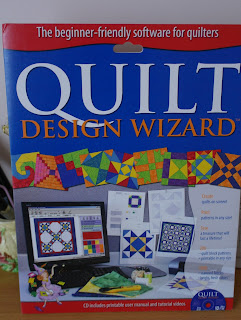 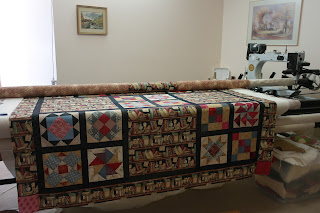 Another one of my UFO's that has been waiting for years to be quilted.  It is made up of a feature fabric purchased by both my late mother & myself, because of the bookshelves.  To make it stand out, I designed this as a sampler of 8" blocks from a Marsha McClosky book.  Part of the quilting I showed last post on the Photo Scavenger Hunt.  DD thinks I should call it 'Bibliophiles Anonymous'.
Does that sound OK? 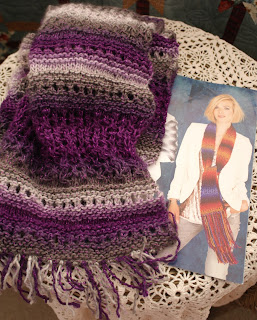 A scarf I have just finished for myself, which will look good with my rain jacket.  This wool & pattern were bought in UK last year. 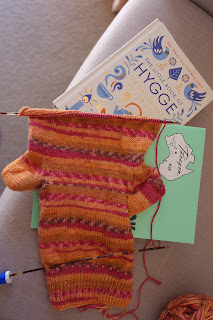 Aaaah!  Does anyone know what I am attempting here?  So far so good.  The book in the background is new to me and I'm finding it very interesting, though now I want a wood burner.

LAST BUT NOT LEAST.

I showed some wee flowers in a previous post called Arisaemas & told how I was allowed to dig up a little bulblet.  I planted it in a pot with just the one leaf.  Look what happened during this week.... 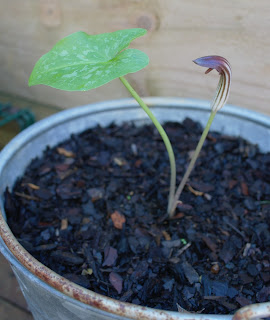 A flower has appeared.   How wonderful is that!!!!!  I just hope more little bulblets are forming below.


OK, enough babble from me.
Have a good weekend all and take care.
Susan.