Thanks to Kate, here we are again for another exciting year of "hunting", for photos & photo opportunities.  Thinking outside the box can be both easy & difficult at times & I'll admit that these really took some brain power, then, the metallic one led me astray!!!  Too many ideas & pics has me seeing triple.  Hope nobody minds.


All three of these photos have come from my archives.

2.  PLATE.
I so wanted to think outside the box on this one and came up with number plate, name plate, gold/silver plated, china plate, the earth's plates, foot plate on a steam engine, woodcut/printer's plate or even plate glass.  Which one to use?  But no, I couldn't find anything other than a china plate, which of course we all have in our homes.  Aha, whilst sewing yesterday, it struck me!!!!!  I have 'TWO' throat plates for my sewing machine.  The zigzag throat plate, the one on the left, is standard with all sewing machines, but you can also buy the single stitch throat plate to make life easier if you do lots of quilting & don't want a tangle of stitches underneath at the beginning of your stitching.

3.  MADE.
A beautifully constructed moated sand castle/fort left by some children after a day at the beach.
Quite intricate if you look carefully.

4.  AGED.
This is what I am using for aged.  An old wall lined with newspapers and the bed sporting a well worn hexagon quilt.  Some of the hexagons are thread bare and others nearly unattached, but still beautiful in its own way. 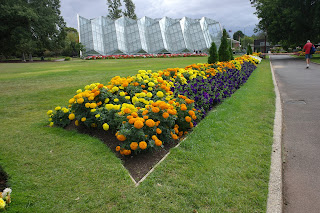 The glasshouse in the Ballarat Botanic Garden is very modern and angular.  On my last post I showed some of the variety & colour of the plants in there at the moment.  I may have used this photo before & that is my DH strolling down the path, so no need for cropping or otherwise.
Clicking on any of the photos, will bring them up to a better size & you'll see more.

6.  MY OWN CHOICE.
This shop with the intriguing name says it all.  I was looking in the window, then popped inside to ask if I could take a photo and use it on my blog and they said it was fine, but it never made it on till now.  Taken in 2016.  I love browsing through shops like this, which bring a lot of memories to the fore and are great to while away some time.  I very rarely com away with anything these days, but still love doing it.
This lot had me thinking for the last few weeks, so well done to Kate for making me use my grey matter.

My lot done and yes, I am early.  Tomorrow is supposed to again top the 40+ temperature mark and they have said there could be statewide power shortages for both Victoria and South Australia due to the ongoing heatwave conditions.  Many fires are burning across 3 states - Tasmania, Victoria and New South Wales, so not very pleasant here.  We desperately need rain and cooler weather.
Take care all & can't wait to see all the other photo hunters posts.
Huggles, Susan.
Posted by Susan Smith at 4:56 pm 36 comments:

Hoping to blog more this year, so I've been thinking a lot of late about what I want to achieve.

a.. A little more about my quilting & other crafts, including DH's.
b.. Days out/holidays in photos.
c..  Around the garden & house.
d.   Walking to keep fit.

As I take my camera, basically, everywhere we go, I've always plenty of photos to hand, but it is thinking of what I want to say in words.  My friend Kate, has such a way with words & I struggle to make anything sound interesting enough to warrant reading.
Last week, we took a short break to Ballarat to test the car was up to pulling the caravan on a warm day & all went well.  As I sit here, thinking & writing this, it has topped the 40deg mark again & we are in for more of the same on Tuesday & Wednesday, before the temperature drops back to the low 30s.  We desperately need some rain too.
A couple of photos from before we headed off last Tuesday. 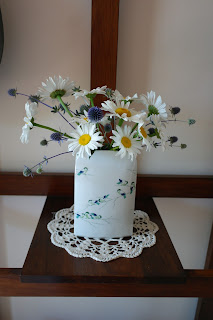 I picked these daisies, Eryngium & Echinops before a hot day was predicted so I could enjoy before they wilted outside. 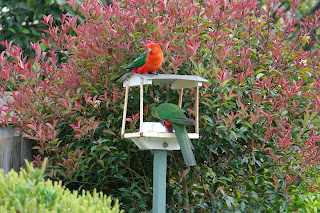 On the Monday morning, I had these two visitors.  King Parrots, a male & female, which I don't get often enough.  Aren't they beautiful? 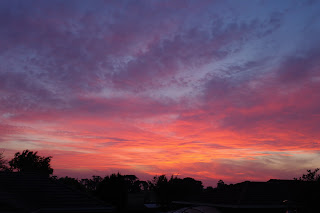 Monday evening saw the sky looking like this, due to a large bushfire, burning in East Gippsland.  It has been contained, but these heatwave conditions aren't good.

Tuesday, off to Ballarat.  I saw my friend Joy for a chat on Tuesday evening, then Wednesday we headed down to Torquay to visit a large quilt shop called Amitie Textiles.  I forgot to take any photos, but did purchase just "ONE" piece of fabric.  Amazing!!!!  We ate lunch near the sea.


Next we headed back towards Ballarat, exploring new roads as we went.  First stop was the lighthouse at Split Point.

On Thursday, we took ourselves off to Ballarat Botanic Gardens, which some may remember, have featured quite a bit on my blog, especially when we lived there for a short time.  Of course, first stop was the giant glasshouse.


This time of year they were planting up outside, getting ready for the Begonia Festival, held in March/April.  I spotted some topiary, which is quite new.
Lastly, a few special trees, classified by our National Trust. 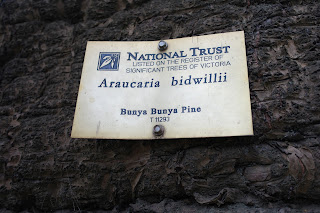 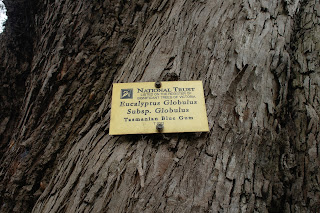 Enough from me waffling on.  I'll be here again before January closes to start, what I hope, will be a couple of ongoing challenges/goals, I want to do this year.
Take care all & huggles.
Susan.

HAPPY NEW YEAR TO ALL. 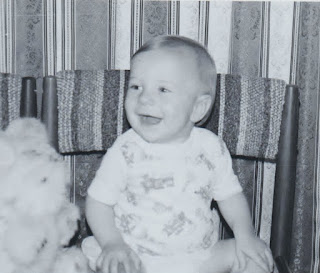 And we have another birthday!!!!!  Today it's our youngest.   Son J,  celebrates his 41st.  Happy birthday.  That's our 4 done with birthdays till December this year.  I omitted  two, as I just wasn't blogging, so we now have our older son who is 42 & my stepdaughter who is now also 46 too, 13 days older than my daughter.  All have done us proud.  Thanks a squillion kids.


That is my problem at times, as I love designing & then suddenly, I think of something else & it gets put aside.  I also have another problem of getting tops quilted, if they are not being given away immediately.  I still have my "tub of shame", though it is a little lighter after quilting this lot, below.
I know I've shown this before it was quilted, whilst I was piecing it.  I designed it to use the leftovers from a jelly roll I used to make Dotty Custard. (this post).
Another of my designs, now quilted & bound, which I took with me and started at a Quilt Retreat in Bordertown, which I blogged about here.
This was the second time I'd made this particular quilt from a very old book called More Lap Quilting by Georgia Bonesteel (1985).  Made around 1996/7 from a border fabric print and made with both templates and a rotary cutter.  Very different from the first one I started in 1986, before rotary cutter days and using templates, tape measure & scissors.  No. 1 was finally finished  with a meandering quilt pattern, using my first short-arm quilting machine purchased  in 1999 after I was made redundant from the bank.  No 2 has a lovely all-over pattern called Little Leaves, also by Kerryn Emmerson, even though it was suggested I do a custom job on it.  I think it works beautifully as is and the fabric is too busy to see much anyway.
I've two others I've done, but bindings aren't finished yet, so will show them soon.

I talked about our hectic 2018, but forgot all about a few odd hiccups throughout the year.
April saw our 13 year old microwave die and also on the Thursday before Christmas our 18 year old washing machine took its last wash.  I am now the owner of a (my first ever), front loading washer.  I also needed new glasses, which added to our expense list, but we did make a few purchases, that we've both been hankering after for a while.


One more photo for today, then I'll retire from the study, to a cooler part of the house.
BTW, did I mention that it is HOT today.  Our weather station is showing  42.6deg & the wind is blowing from the north, straight from the middle of Australia, where the mercury has been in the 40s this week around Alice Springs.  A cool change is forecast for later this evening & hopefully in the low 20s tomorrow.  Can't wait for that................😌
A few last words........ Thanks to all my blogpals for taking the time to read this little blog, commenting & being my friends, although I've not met all of you.  I didn't think I'd ever be able to do this, but come the end of January, I have  blogiversary   "No. 6".   Can you believe it?
Oh, one of the highlights from last year, was that I was published in an on-line magazine.  Maybe again this year!!!!!!!!!!!!
OK, I'm off for a cool drink & to veg in front of the cricket for a while.
Take care and huggles from Susan.
Posted by Susan Smith at 2:55 pm 14 comments: