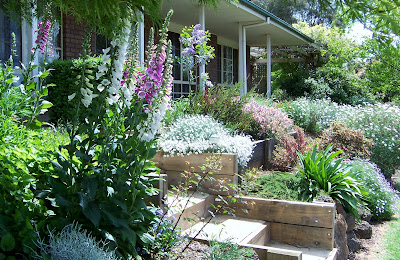 My garden at No.4 which was full, cluttered for most of the year and a joy for me to work in. 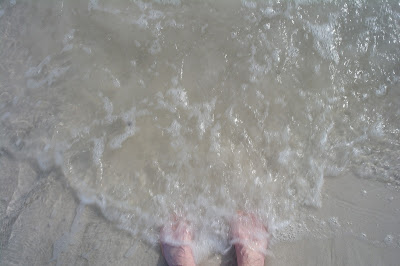 My tootsies getting wet on an outing to Wilson's Promontory the summer before last. 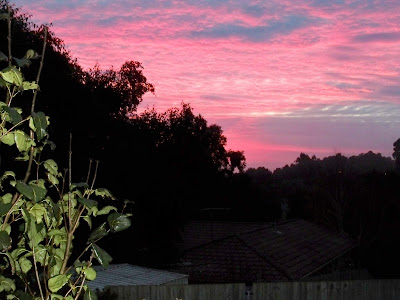 Again a photo from No. 4 of a beautiful sunrise which I could see from our  front verandah.  I found this accidentally while looking for my cluttered photo.😊 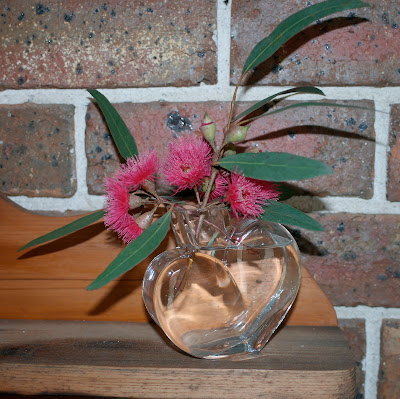 Above is a small vase of Eucalyptus flowers which I could have had for 'pink' too.  We usually refer to these as gum blossom & after the flowers, they have huge gumnuts. 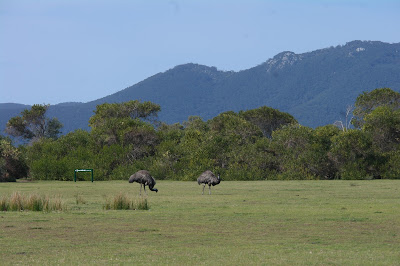 Another photo from our day out at Wilson's Promontory are these two Emus, blissfully unaware of me taking photos. 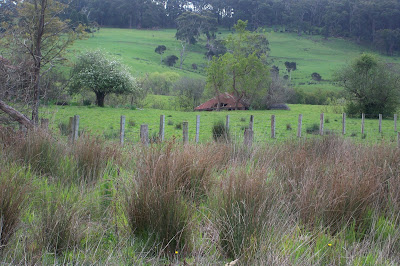 Do you see it?  Ah, the roof of a derelict building now resting on the ground on a day out in South Gippsland one weekend earlier this year. 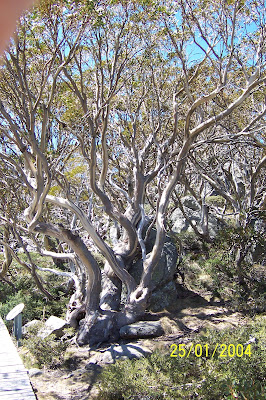 I do have a 'thing' about trees & have many photos in my archives.  Taken in 2006 (not the date on the photo), whilst on a trip along the Great Alpine Road in the Victorian High Country.  I do think trees can be so amazing in form, where they grow at times & their timeless beauty.

My lot done for this month & all from my archives, except for the vase of gum blossom, which was picked & photographed early this month.  They last for a good 3 weeks.
I may be a little quiet for August with some family commitments coming up, but you never know, a blog post could pop up.
Thanks Kate for hosting these & it keeps my mind sharp when out & about or sometimes a quiet time on the computer looking through the archives.  Look forward to seeing what the other Hunters have chosen.
Take care all, have a great weekend & big huggles from down under.
Susan.
Posted by Susan Smith at 1:36 pm 25 comments:

Just a little catchup for mid month with some finishes by DH & myself.  A few mischievous bits too. 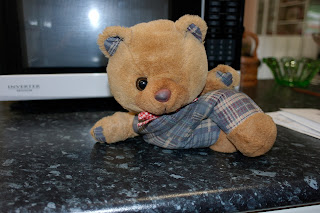 My little heat bear just popped out of the microwave & sat waiting for me.  Actually DH had warmed him up & pulled him out quickly & I couldn't help but take this photo as he looked like he was posing.  DH calls him cyclops as he lost an eye many years ago. 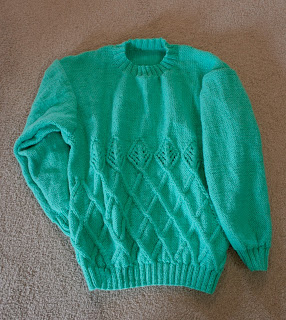 This jumper was started a few years ago & finished late last year, but sat in my work basket waiting to be sewn up & the neckband done.  It happened this week.  Never sure whether I like all that purl work on the outside or not.  Not been worn yet. 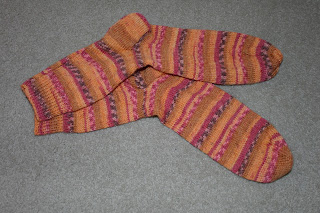 Ah, those socks I started way back when, on two needles, now sewn with a seam down the back & of a size to fit a giant.  Not bad as a first effort, but I wonder who'll wear them.  Way too big for me. 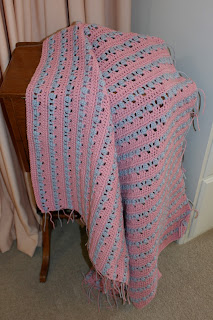 A very odd crochet rug I made up as I went along to use some of the wool from my late mother's stash, which I brought home many years ago.  I will donate it to a nursing home as a knee rug. 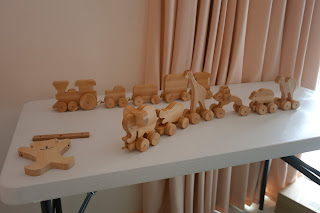 I showed these in the making last month and now they are finished & waiting to go to a local craft shop for sale. 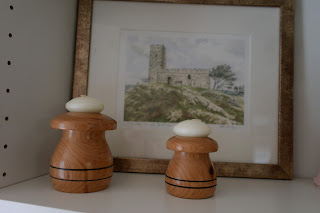 These tea light holders were a surprise for me.  Aren't they sweet. 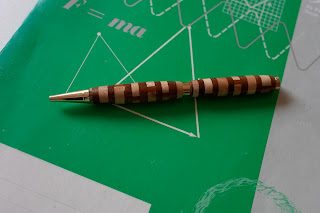 The experimenting with pens continues, but this is one I snatched early on & it lives in my graph book folder.  I'll have an exciting one to show soon........watch this space.

QUILTING.
I've been waiting for some nice weather, but alas, it hasn't happened, so I took these inside and although not good photos, they'll have to suffice.
Many years ago I purchased this very French cafe type fabric (around 2004/5) & designed a small quilt/wall hanging to feature it.  I'll admit that it has been finished for a long time, but never shown on my blog and it will soon be off to a new owner as a gift.
Another of my designs featuring bird fabric.  I know I showed this in the making whilst living in Ballarat and again never showed once finished.  This will be staying around for a while longer.

The two below were made from magazines in the very late 90's, early 2000's, but only quilted last month.  I'm trying to make a dent in my UFO pile.


These two will probably be gifted as well.
I had tried to capture some photos of the garden, but with all our gloomy days this month, not much has been happening,, so that could be a post later this month depending on the vagaries of the weather gremlins.😖
We've a very busy month or so coming up with lots of appointments, car club AGM & car boot sale, little brother's yearly review for NDIS, which is a lot of work, so may need a blog break to fit all this in.  Enough from me, but I will catch up again for the photo hunt next Friday.
Take care all & huggles, Susan.

Recently my blog friend Joy, from Days Filled with Joy,  talked about her new design wall & a couple of people pointed out that with rental properties there were limitations to what they could use.
Hopefully my design wall will be an interesting alternative to something permanent.  Mine came about, as where I sew is quite small, being the third bedroom and measuring approximately 9'8" x 11', including a built-in robe. 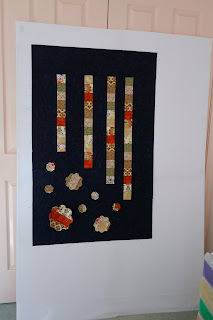 In it's usual position in front of the wardrobe doors.  It is easy to move out of the way, by folding & placing somewhere else. 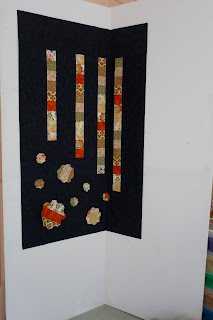 Shown partially folded.
HOW IT WAS MADE.
We used a slim core board, sold here in Australia under the brand name Corflute & was purchased at Bunnings a big hardware chain.  The pieces were 900mm x 600mm x 5mm thick.  We used 4 which cost us $31.40 ($7.85 each).  They are extremely lightweight. 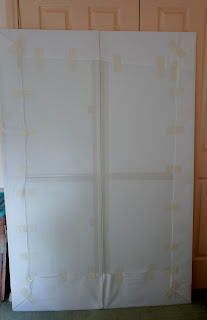 Next we taped them together as above using general purpose cloth tape measuring 5cm wide. 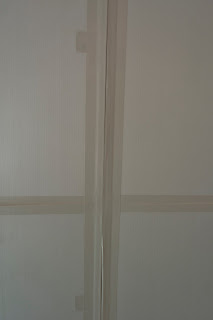 A close up of the taping.  Under the felt on the front, I think it was over the join lengthways, but on the back we put it both sides of the join so it will fold nicely.
Next came the felt for the front.  This was purchased at Spotlight (another big chain store here) and comes on a roll.  It is quite fine & wide enough to cover both boards & I must have bought about 3 metres to cover the length.  Again we used the tape to secure it on the back after pulling it quite taut.  I had tried a thin batting, but found it awkward and it seemed to stretch out of shape.  The felt has stood the test of time over 4 years so far. 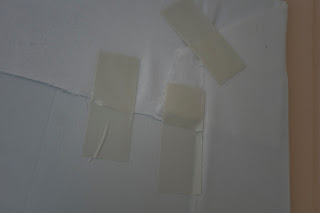 The tape in position. 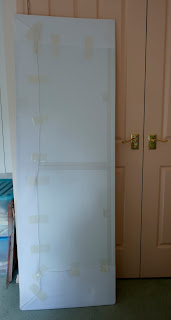 The board folded in half and easily moved out of the way.  It is lightweight enough for moving & as I'm only about 148cm tall, I don't have any problems & most blocks, etc stay in place.

I also have a small design wall made around 1997 which has moved all over the place with us & has always sat not too far from my sewing machine .  I use this when piecing individual blocks or as is shown below, for contemplating bits 'n' pieces I may be playing with.😉 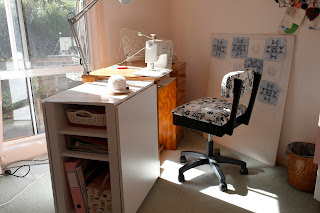 The little table beside my machine desk is a recent purchase from........ ALDI, of all places, & I'm sure everyone has heard of them, not just here in Oz.  It extends both sides, and is great when attaching borders or binding, as it supports all the weight of the growing quilt. 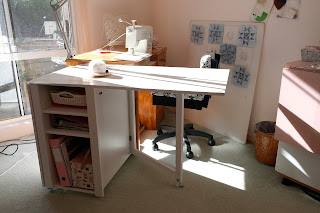 Excuse the messy sewing space and the quality of the photos, but the sun was in & out whilst trying to snap the room.  I really wanted to get this post done for someone who was interested.
Today is very miserable with gusty high winds, biting cold, gloomy grey skies and the occasional showers and we have been told there is more to come over the next 4 days possibly.
Hope this post helps any quilty friends who need an easy design wall solution.
Hope to be back with a bit of crafty catch up from DH and I before too long.
Take care all & huggles.
Susan.

I'm linking this month to join with Cheryl at Meadow Mist Designs for the favourite finish.  Although some may have seen this quilt shown in June, it is the one I liked the most. 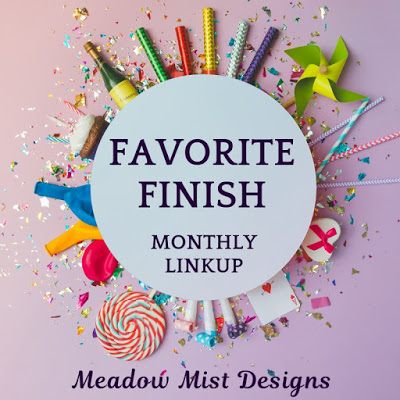 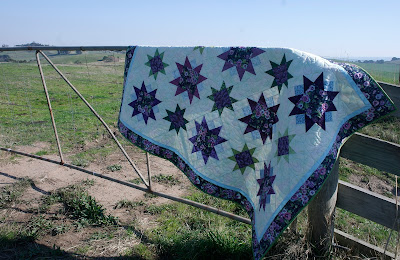 It all started many years ago with an outline sketch in my graph book.  It sat there just waiting for the right time to be started.  I had the pansy fabric ready to go, found other bits to go with it, then the background fabric & put it aside in a basket. 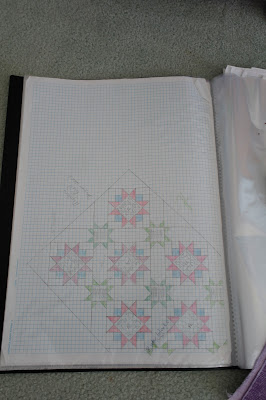 I'd thought about doing it as a mystery quilt on my blog, but just don't have the confidence.  I even looked to see if I could find the block in books, but none quite like it.

Come the beginning of 2019 and I decided to make a start. 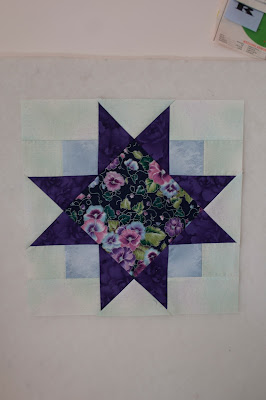 The first block on the design wall after trying to do a tutorial for it. 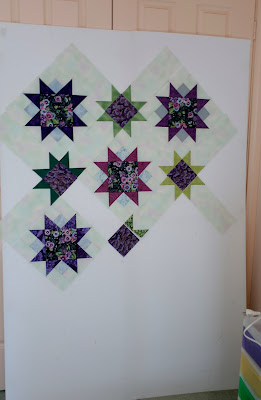 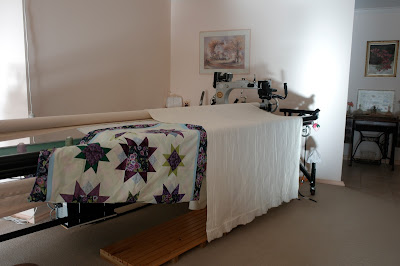 Finally done & ready to be quilted. 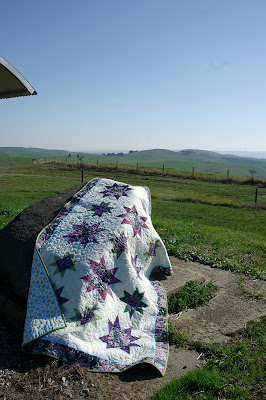 Hope you enjoyed it's journey from start to finish.    Thank you & there are lovely quilts to be seen for June over at Cheryl's blog linkup.
Take care all & huggles, Susan.