AND A FEW OTHER BITS!

OK, I'm actually joining in with Joy this month to show that I am finishing a few UFO's & stash busting too. 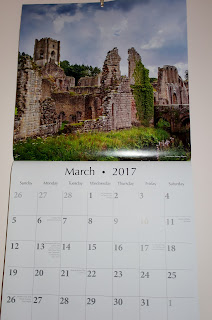 But, before we start, this calendar will be turned over tomorrow & one of my favourite places will not be in front of me as I walk into my sewing room.  Wonder what Aprils' will be?

I pieced this top back in "about" 2001 I think and finally quilted it in October last year.  It was the first thing I put on the machine after our UK trip.  The binding went on in February this year & was finished in early March.  I'll possibly either sell it or give it to charity.

Second and third.
I know these have both been on recently.  They  both now have binding & are finished.
They come from my stash busting efforts.  One jelly roll, white background fabric, a beautiful rose fabric I purchased as I loved it, and plenty of black leftover scraps. 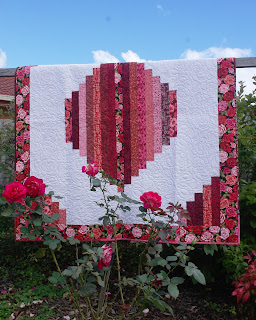 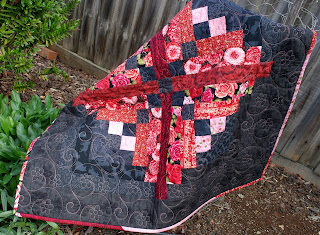 I'm trying to be creative with the photos.  Have I been successful?  Not too sure about that, as I can't seem to find anywhere to photograph them.

I told the story of this in my last post & voila, binding on  now too. 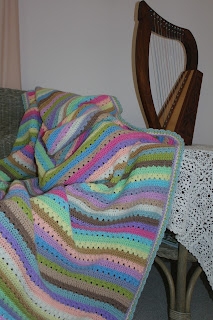 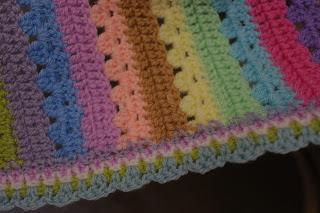 The cupcake crochet rug from Attic 24 finally finished.  DD bought me the pack of wool, last Mother's Day & when it arrived all the way from Wool Warehouse in UK, I was so excited, I nearly hugged the parcel delivery man. (I didn't).  It came along slowly until the hot weather hit, then I slowed to halt at the border.  Just too hot over the lap, but as our nights have cooled, it came out and, yes, it is done.  Closeup so you can see the dainty striped edging. 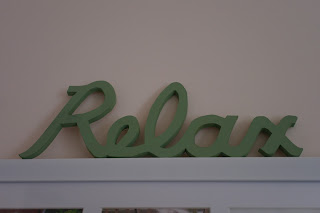 Hubby made this little sign (trying to tell me something I don't do well), & I said I would paint it.  Oh dear, it languished colourless for a couple of months till last Wednesday, when out came my paints & now sits proudly above a photo collage frame of my blogging friends who keep watch over me whilst sewing.  Thank you all for being here for me.

Seventh.
Well sort of a finish!!!!!
Remember the recipe awaiting "baking" on the book holder in my Scavenger Photo Hunt this month.
They were made this morning, using a combination of 2 recipes, due to lack of buttermilk & vegetable oil. We tried one each this afternoon & Hubby announced they were yummy & light, so I'll write the recipe down, so I can use it again.

Maybe not all stitching, but definitely all waiting to be done.

I am having a little giveaway to anyone who comments on my blog between now and Sunday 9th April.  I will draw a winner on the 10th (grandson B2's 11th birthday).  It is to celebrate my 4th blog anniversary,(Jan this year), 40th wedding anniversary & also my first quilt made 40 years ago too.

Whilst sitting here composing this, there has been more news of the devastation cyclone Debbie has left in her wake as she now travels down the coast of New South Wales.  Definitely a big storm which has hurt so much  Queensland & NSW.

March seems to be galloping on by at a very quick pace.  Before we know, it will be April and really into Autumn as our clocks go back on Sunday.

A bit of catching up in this post on the garden, craft, oh and a little shopping. (needed!!).

OK, roundup of garden done.  I must put on some photos of above steps, as they were when we moved here.  Slowly, slowly we go.


I know!
I am keeping you guessing.

Off to Spotlight we headed yesterday to purchase either a flannelette sheet or fabric for my large design wall, which I made ages ago & has been a complete disaster.  In the end I bought 2.2 metre, & should be able to cover the 2 pieces of thin board & this time know that the blocks will actually cling to it.  I have a small board with a lightweight batting that is very old & great, but doesn't fit a larger quilt, when I'm working on it.  The lightweight batting I purchased for the big one has never worked, so , hopefully this one is a success. 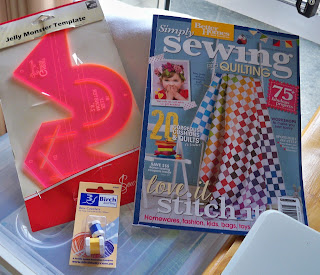 But what else hopped into the bag?  A ruler I'd never seen before, which is to use on jelly roll strips,
a large stitch counter to go on thicker needles when I'm knitting and a magazine.  I'm not sure whether they were having a sale or what, as I'd noted the prices of each thing & when she rang them up, the ruler was was cheaper, as was the fabric & the magazine is marked as $9.99, but scanned as $7. so I definitely came away with a few bargains. 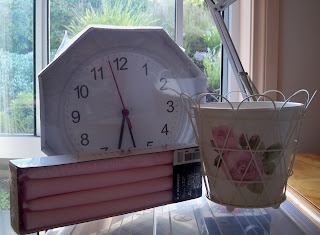 This lot came from IKEA.  It is not too far from where we were and I love wandering around & looking at all their little room settings and gathering up ideas.  Hubby hates it, but indulges me every so often.  I could have bought lots more, but I'd been looking for candles when the Photo Hunt words came up & couldn't find any, so when I found these pink ones, I couldn't resist.
The clock was all of $2.49 (only plastic), which I intend to pretty up & hang in the sewing room, so hubby can have his old one back in the woodworking shed.
The little pot is just pretty & once again I couldn't resist.

That was just a quick catchup and I'll be back with more at the end of the week,as I'm joining in with Joy from Days filled with Joy and her monthly FINISHING STITCHES.  Trying to beat the UFO pile down and for me, stash busting as well.
Take care all & enjoy the rest of the week.
Huggles Susan.
Posted by Susan Smith at 11:17 am 12 comments:

Linking up with the lovely Kate for the second hunt of 2017.


That's my lot for this month.
I found them really hard for some reason, but I suppose Kate wants us to think outside the box, with our own interpretations and I think this month I might have gone too far on some.
Looking forward to seeing how the others went.
Thanks for visiting & take care all.
Susan.

Wednesday dawned fine, but very hot, but we pootled our way over to Bairnsdale to buy hubby this.

Then it was nearly time for lunch, so we drove out to Paynesville to sit by the water.  It looks out over Lake Victoria, part of the Gippsland Lakes system & a car ferry runs to Raymond Island.   I blogged about in January 2013, which was my "second" ever post. 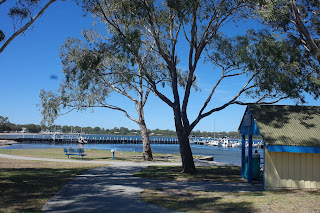 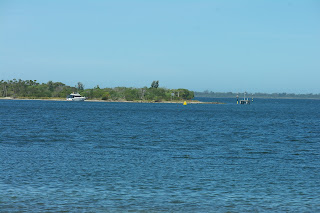 The above are 2 views from near where we sat for lunch. 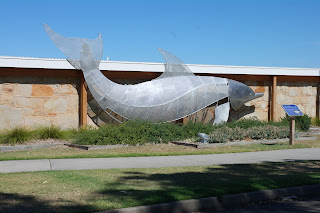 This oversize fish sits at the back of the public amenities. 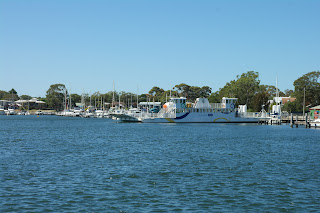 The car ferry I mentioned above, coming back from Raymond Island and probably takes all of 5 minutes.  This load has a cement mix truck aboard I noticed.  Must be building something over there.

Not much happening on this front as it has been hot & dry for March so far.  Rain predicted for tomorrow, so we'll see what happens.

It's been a bit hit and miss on this front lately, as I've talked about quite a few outings, not feeling the best (new physio is going to put ongoing pain to rights 😩).  Yeah!  But, I do have a few things to show and talk about.
The cupcake rug has just one more round to do on the border, then the big TAHDAH!
The black quilt I showed partly done on the machine and the table runner have both come off now, and got their bindings today.

I also have a design from my Quilt Wizard program, that I've just started.  This is the final in my trio of quilts named for my grand daughters.  Miss A's is being made from my stash and has had the fabrics reworked a couple of times already, as some of the bits pulled from the cupboard haven't been enough.  Would you like to see it as I do the blocks?  The the full reveal will come later.


Just to keeping you guessing what it will be like.
Doing this may get me posting a little more often, though we do have the Photo Scavenger Hunt, this coming Friday and I'm finding this one really hard.  Still need a few photos.

That's about it from me today.  Hope everyone had a wonderful weekend & at least a bit cooler than we had (36deg on our outdoor weather station just now at 4.30pm).
Take care all.
Susan.

Sunday dawned overcast & a "little" drizzly.  We only got just below 1mm in our rain gauge.
It was the day of our Car Club run to Blue Lotus Water Garden in the Yarra Valley.  We were to leave the club rooms at 9.30am & wend our way up there via a scenic route (not the freeway).  And how many ended up going?  Oh, this many cars.😖

OK, that is not much of a turnout for us, but we did have a great & rather amusing day,  On our way through the forest with lots of twists and turns, poor M driving that middle car spun out on a corner, for no apparent reason, which frightened the rest of us, especially us, as we were travelling behind.  None of us going fast or doing anything stupid (bit old for that caper anyway), and can only put it down to the slightly damp conditions.  All was well, nothing had been coming the other way & we continued on to Powelltown for a welcome coffee break.
Back in the cars & driving on, suddenly our leader I, stopped.  There was something on the road.......

By the time I snapped this, there were five cars pulled up & one stopped the other way and we were trying to shoo it off the road, so it wouldn't get hurt.  One couple, said they'd actually never seen one in the wild like that.  We have a couple of times.
These two incidents certainly made for an interesting start to our day out.


They also had some other water loving plants.


We'd taken a picnic lunch with us, so ate that, then wandered for over an hour, exploring and certainly enjoyed.

Yesterday (Monday) was a public holiday here in Victoria, but we caught up  on some housework & in the afternoon, I finished quilting this. 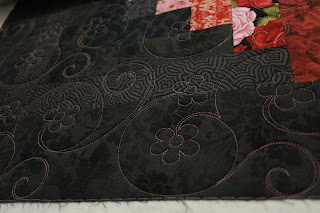 I've not taken it off the machine yet, as there is enough backing still to do a small table runner, that's been hanging about for ages.  I've something in mind for the table runner & will talk about that at a later date.
Tomorrow (Wednesday 15th) is hubby's birthday and we are off out for the day, travelling east away from Melbourne & all its traffic, to purchase a 'chuck' for his lathe.  I've been saving money from selling the blueberries.😊  There is also a British food shop, where I can stock up on my Nairn's oatmeal biscuits & a few other bits we like, but can't get anywhere else over here.

OK, enough from me for now, as I'll probably post again on Thursday with lots from our next adventure out.  I'll look out a map of Victoria, so I can point out where our area of Gippsland is, as I know I quite often talk about it.  I'll find something for my next post.