Linking up once again with I live, I love, I craft for our wonderful photo hunt.  When I first saw our list of words, it was an, "oh my gosh" moment, but once you settle in, it is not as hard as you first think. 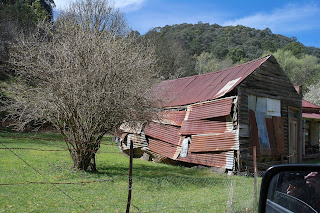 The first thing I thought of for this one, was 'making' with a photo from a current craft project, then I remembered thinking when I took this photo, of the quote, "Make do and mend".  Well, it's definitely making do and mending.  Taken on our recent trip to Canberra.
2.    EMPTY. 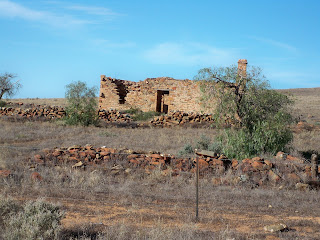 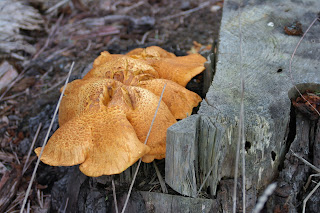 I came up with so many for the letter F, and chose this rather large fungi beside Lake Learmonth, near Ballarat.
4.    PAPER. 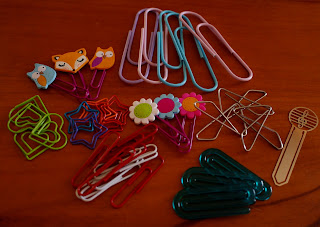 I really struggled with this, trying to think outside the box.  Looking for a "paper" clip one afternoon, a thought popped into my head and I snapped these on the coffee table.  The cute animals & flowers were ones I purchased on a trip to UK.  Duh!
5.    NEAT. 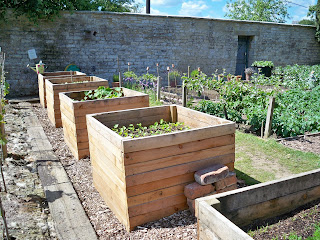 These waist high veg beds are really such a "neat" idea, espcially for someone with back issues, (like me).  Photographed in the walled vegetable garden at Nunnington Hall in Yorkshire.
6.    STREET. 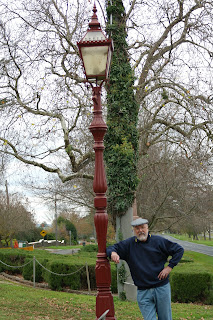 Leaning on the lamp post at the corner of the STREET.
Does anyone remember this song, sung by Herman's Hermits or am I showing my age?  This was again taken at Learmonth when we lived in Ballarat.
7.    KETTLE. 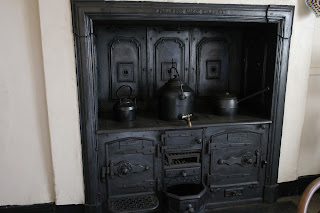 A lovely old kettle sitting on the range at National Trust property, Como House here in Melbourne, which we visited a few months ago.
8.    UNEXPECTED. 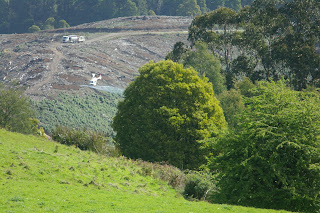 Last post, I talked about our "What If" afternoon driving through the forests south of town, but I didn't show this most 'unexpected' moment.  We suddenly came upon a helicopter being filled by one of the trucks in the distance, then taking off and spraying either pesticide, fertilizer or seed.  We sat in awe, thinking how amazing to see something like this.
9.    VASE. 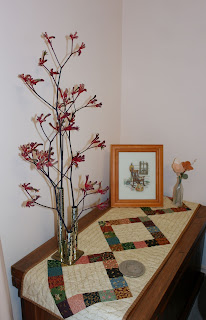 I think I've shown this "vase" before, but I love it for arranging a few simple flowers.  Shown here are kangaroo paws from this garden.  I'd seen a similar vase & thought how lovely, but it was pricey.  We stumbled upon this one & it was so much less expensive & it gets used a lot.
10.   MY OWN CHOICE. 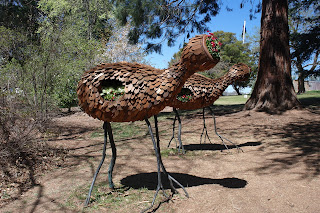 I took this photo whilst at Floriade in Canberra last month & guess what?  No people around.  I expect they are supposed to be a couple of emus & I thought they were so cute.  So did Little E & we both stood snapping away with our cameras.

Well, that's my lot for this month and look forward to seeing what everyone else has come up with.
I'm a bit later than usual, due to dealing with conference calls for little brother & needing a good walk.
Have a great weekend all and I'll be back Tuesday joining in Finishing Stitches, which I've been a bit wayward with lately.
Susan.
Posted by Susan Smith at 8:53 pm 29 comments:

WHAT IF?
One Saturday, just gone by, we needed milk and to post two birthday cards, so chortled off down town.  After said chores, I decided with camera in car, to get some photos of cute alpacas in a paddock, just out of town.
Needing to then turn around, we carried on & noticed a road on our right, which we'd never explored & carried on down to a T-intersection where this view greeted us straight ahead.
Then we had the "WHAT IF" moment.
Would we turn left or right.  Well, we decided left & went on one of our adventures, going through the Strzelecki Ranges to Mirboo North where we had coffee & went to an over-stuffed plant nursery.
I bought a pretty coral coloured daisy & a mauve scabiosa, which have now been planted.  I'll show some of our garden on another post next month.  Very behind on my blogging.
Through the ranges, there are both pine & native tree species plantations.  Just a quick look at what we saw.


On the way home, I quickly snapped this farm dam, sitting high on a flat area of hillside with views beyond.
OK, I was going to do another one of our days out, but have just run out of time, with lots to do this afternoon.  The next one was "a spur of the moment" or " we keep saying we'll do this", so off we went & did it.
As it is hump-day, I suppose I'll wish all a good end to the week & see you Friday with the Photo Scavenger Hunt.
That's all folks, take care,
Susan.

Travelling Home.
Monday morning saw us setting off for our journey home.  We'd already decided to use back roads to complete our time without caravan in tow.  Our trusty thermos was filled with hot water, sarnies made & off we went.
First stop was beside the Cotter River on the outskirts of Canberra, where we had morning tea.


We drove down through Tumut (shown in Part 1 post), had our lunch, then travelled up through Batlow, Tumbarumba & down towards Jingellic on the Murray River.
Not far outside the town of Tumbarumba, we pulled into a side road for me to take these photos....... 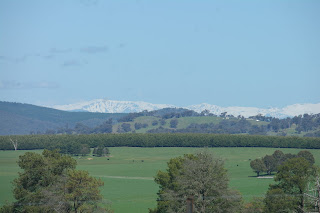 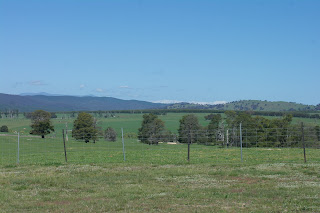 but, another car pulled alongside & asked what we were doing.  Ooh, looked like an officer of the law.  Right, we'd pulled up at the gates to a Correctional Facility & were told we could take better photos a little further along the road.  Isn't this (above) the most amazing landscape & what lovely views for the aforementioned inmates.
Nearing the border between N.S.W. & Victoria we passed over this bridge on the Murray River. 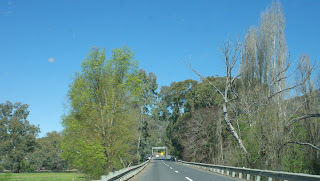 Travelling & taking photos isn't always easy & although I try hard, I sometimes take them from the windscreen & have to edit out the bug splats, which I've not done on the pic below, just to show what it does look like at times. 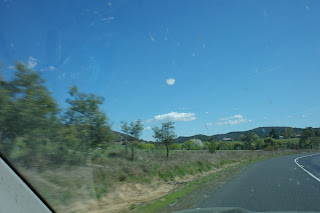 Soon we were passing the backwaters of Lake Hume, an enormous water storage on the Murray River outside Albury, where we were booked to stay the night.


Next morning, for the last day, it began on freeway to Wangaratta, where we turned off to again come via back roads.  We stopped in Whitfield, a small village, to have our morning cuppa & was actually able to have a latte made on "proper" lactose free milk (not soy), as some will try to give you.
Travelling further, we finally reached Mansfield where we bought some sandwiches, as it was the last town we would go through for a while and ate them at a picnic area beside a river, one of many which run into Lake Eildon.  The countryside in the area is beautiful at this time of year.

Tummies full, we headed off on the last leg towards our area of West Gippsland.

Our next photo stop (the last), was at Woods Point, a small town which once had the second richest gold mine in Victoria & in its heyday boasted 36 pubs, 3 banks, Hospital, a school with 300 pupils, a cordial factory, 2 breweries, 2 libraries, 3 churches, its own Mayor & town crier.  It even had 5 suburbs, but not much left now.  We must take time to come back & explore more here.
This photo (below) is supposed to be the most photographed petrol station in Australia.  Much of this information was in a brochure we actually found in the Morris yesterday, whilst looking for something else.  It prompted me to get this Part 3 done!!!! 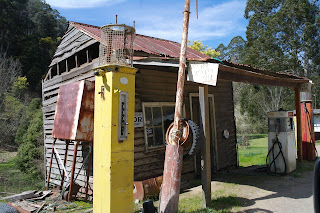 OK, we finally made it home after one final stop at Noojee for afternoon tea.
Sorry this has been so photo heavy (there were lots more), and hope I haven't bored you to tears, but I needed to get it done.  We've had a few day trips over the last week and I want to post about those before the Scavenger Hunt & Finishing Stitches which I participate in with 2 friends at the end of the month.
Uhm!!! No, I'm not done yet as I have a couple of artistic shots or as I'm not in the least artistic, should I say "funky" shots.  Sometimes I like pointing the camera in weird ways, whether it be upwards or on hands & knees, trying out strange angles or odd subjects & securing something a little different.  Well, just being me in other words. 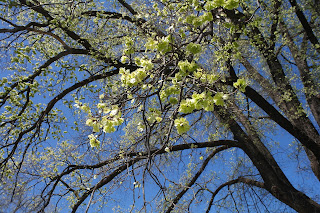 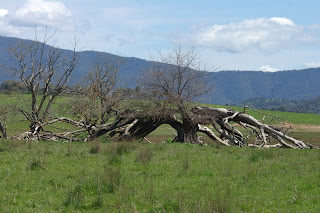 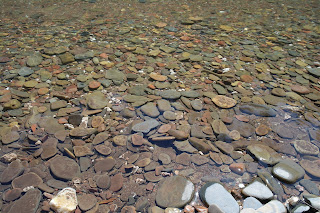 Take care all and huggles from Susan.

Day 1 in Canberra was just a chillout day with the grandchildren who weren't sure what they wanted to do after a few of our suggestions.
Day 2 they suggested we go to the War Memorial in the morning & off we went.  I didn't want to take my big camera & for the life of me couldn't find my pocket one, so now photos taken whilst there.
After lunch we headed up to Mount Ainslie lookout, where with big camera took some photos looking down on our National Capital.


On Saturday we helped DS2 in the garden with some mowing, pruning and weeding, which he' d got behind on over winter, which is very cold there.
Sunday saw us head out to Floriade, which is an annual event to herald in Spring.
Although I was told I'd been before, I couldn't remember exactly when , so I enjoyed the spectacular flower displays.
It was very hard taking photos, because of the crowds (I don't like crowds), and just as you were about to snap, somebody would pass by or stand in front of you, which was so annoying .  I deleted many photos, but here are a couple. 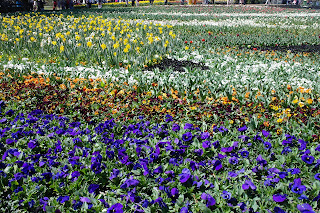 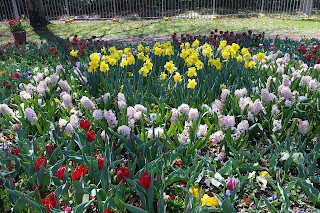 The above two are just some more of the displays.

There were quite a few sculptural items dotted around & although I took quite a few, one in particular will come in handy for my next Photo Hunt, but here are two to for you now. 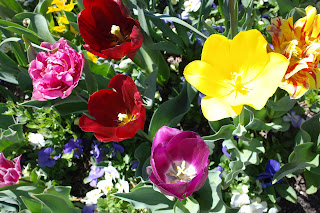 Enough for today and my last installment will be over the weekend, when I tell about the wonderful journey home.
Till then, take care.
Susan.