After a few hectic months, we are hopefully getting some normality back into our life.  I'm not going into our trip to Sydney, but will in the coming month post some snaps I took whilst away.
For now, this is about today and yesterday. with maybe a quilty/crafty post later this week.

MONDAY MORNING.
Started up the vacuum, did a little, then had to unplug to move to another room and what could I hear?
A great commotion out at the bird feeder, which I filled earlier.  Our usual sparrows & doves had been munching away, but I knew that something else must have been there now. 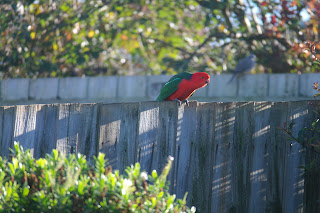 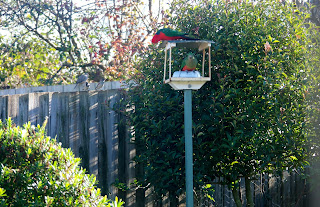 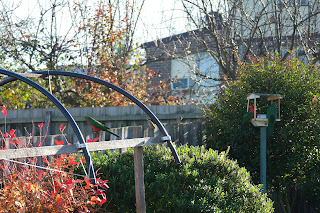 Oh my, what do we have here?  King Parrots. There were actually five to start with, but they all flew in and out several times, with 2 staying in the feeder.  I'd rushed to get the camera, only to find I'd left it in the car & had to tip toe out to the garage without frightening them through the open roller door of said garage.  I made it and had a wonderful time snapping whilst making a coffee & sitting on a stool at the kitchen counter in front of the window.  I popped out to the garage as well to take a few photos.
Just made coffee, then they flew off and as I turned back, these two appeared................ 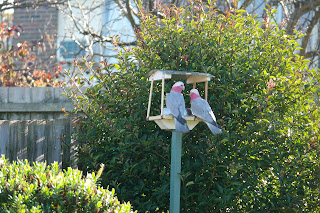 They didn't stay too long, so I zapped my cold coffee and went to sit on the verandah, only to laugh my head off at the antics of the poor doves and sparrows who were then on a feeding frenzy, in case any more "big" birds came back.

A SIMPLE SUNDAY OUTING, YESTERDAY.
Needing a nice walk to clear some cobwebs (walking here is not what it used to be, with all the new estates popping up & being more a commuter suburb of Melbourne, than a country town), so we headed toward Western Port Bay for a walk along Jam Jerrup Beach, where we'd not visited before.
Now I know this is supposed to be a quilting blog, but I love my nature too much, to let it pass.

Hubby told me this looked like a back axle off an old vehicle.  Wonder why it ended up there? 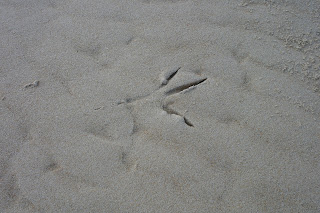 There were many footprints in the sand & also these bird tracks,  but, can you guess what the ones below are? 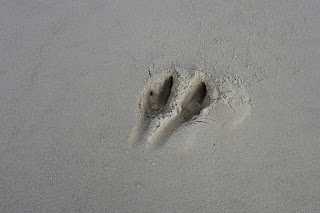 Maybe I could make this into a guessing competition for the first right answer.   Hmmm!  Have I got something small to gift?
I'll leave it open ended for now to think on it over night. 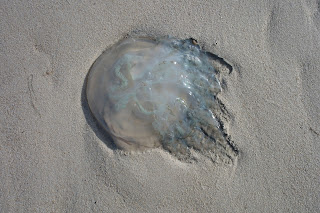 There were many of these jelly fish, stranded on the sand, but they were sort of moving, so think they must perk up again when the tide comes in.  I found them fascinating. 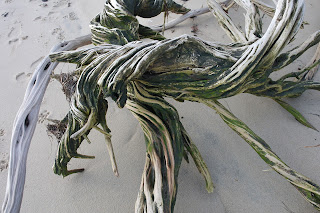 Would this be the start of driftwood, I wonder? 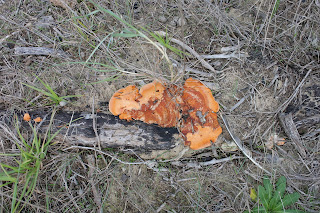 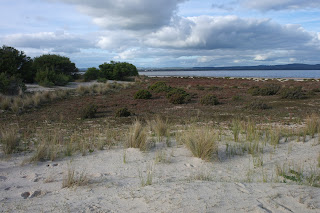 Looking across a smaller bay in the bay from the point, which was where we decided to turn around & walk back along the beach, as the tide was definitely making its way in.
A  wonderful walk, even though it was cool and overcast, with the sun occasionally peeking through to glisten on the water.

Well that was at least something from me and yes, I'll be back with more catch ups this month, including the photo hunt, as I've already found most of my photos, so well ahead with that.
It's very, very cool here at the moment and I've lots to do to get myself back on track, so I'll post this now & wait to see if anyone has an answer for my question?
Take care all, have a great week & lots of huggles from 'down under".
Posted by Susan Smith at 6:02 pm