Sorry to all of my loyal followers and I hope you are all well and enjoyed the Christmas/New Year break.  I think I'm getting my mojo back & although we still have the rest of this summer to endure, the support, kindness, donations and especially the time given from all the volunteer fire people has been overwhelming.  Not just here in Oz, but from all walks of life worldwide.  A huge thank you from me & I'm sure everyone else.
Now onto what the top of this post is about.
A quilt I made way back in 1999 & blogged about here  Well, it is finally quilted & waiting for binding.  This one worked up well whilst piecing, but has had me racking my brains for how to quilt and once I'd made up my mind, I procrastinated with my inability to do it justice.  At the beginning of December it hit the big machine, but all didn't go to plan. I won't go into the problems I had, but let's say, I persevered & it's DONE.......
Talking about quilts, brings me to one of the other reasons I'd not blogged much lately and that is being ridiculed by, I expect, well meaning people who seem to think that there are plenty of books, magazines & the internet to make my quilts from, so why would I design my own & it makes one doubt themselves, but I've decided, I am me & that's how I come.  Oh & it's not been through blogland I've been hurt, but locally.    Enough.............here's some more of what we've been up to. 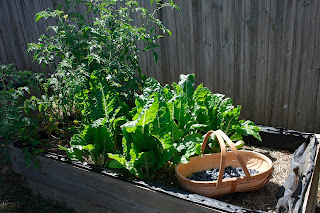 Picking blueberries and watching my two tomatoes & a couple of rows of silver beet growing.  With our weird weather at the moment, I' surprised anything has grown well, but 16kgs of berries so far & we've had a few meals with the silver beet.  Tomatoes are definitely not ready & quite slow forming. 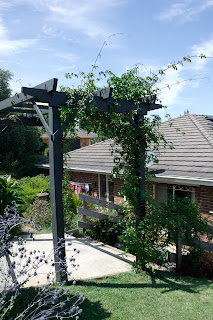 Both the Wonga vine & Wisteria have been having a mad growth spurt on the pergola at the top of the stairs.  We'll do a wander around the garden in another post. 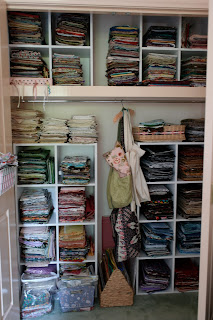 My fabric cupboard has had a tidy up whilst I was working on the quilt on the design board below. 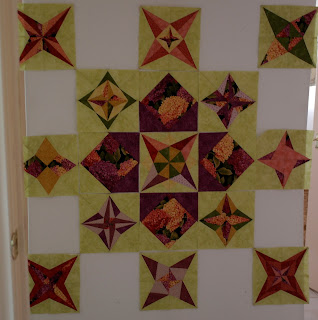 This quilt is destined for our lovely granddaughter Miss A. who has just moved into her first flat with her boyfriend, whom we've met & found so nice.  Very much a gentleman.
The star patterns are paper pieced & were from Alyce Blythe of Blossom Heart Quilts here in Melbourne.  The setting is my own as are the colours.  It is a bit further along now, and I'll show more progress in the weeks ahead.
Hubby has been busy too.  He has had a few commissions with one before Christmas & another I'll show once it is finished.  First up will be a photo of "my" pen.  He has also been asked to make a few of these and they can be quite tricky.  I wonder who will guess what they are made of and how?


The same Mum thought her daughter would love a quilt, so I took two to show her.  Her Mum happened to arrive whilst I was there & took the other for her own Mum (Bec's grandmother), so I sold both.  Wow!  I've plenty of quilts to gift or sell for a little pocket money, which I made & never used.   Luckily I took some photos before I took them for viewing with a couple of others.  Many of the ones I made before blogging have not been on the blog or even photographed so I am slowly remedying this.

Two more quilts were photographed that day whilst we were out and about.
I've two shots of my quilt called Rainbow Stars, which I made after practicing the no waste way of making flying geese blocks.  Only two fabrics were used in this quilt, which were the black & the multi coloured fabric.  Once the geese were made I played with setting them & this is what I ended up with.


OK, so that has been a small catchup of a few moments from recent months.  One last photo to finish and more than likely I'll be here on Friday for the Photo Hunt. 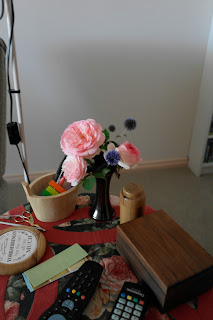 Picked from the garden yesterday & placed on our side table between the two armchairs.  Bit messy, but I am crocheting of a night with my Christmas present from DD, which was the wool for Attic 24's dahlia rug.  Not far with that yet, so it will be shown in progress soon.
Best go as I'm starting to feel weary.  Take care all & huggles from down under.
Posted by Susan Smith at 8:22 pm